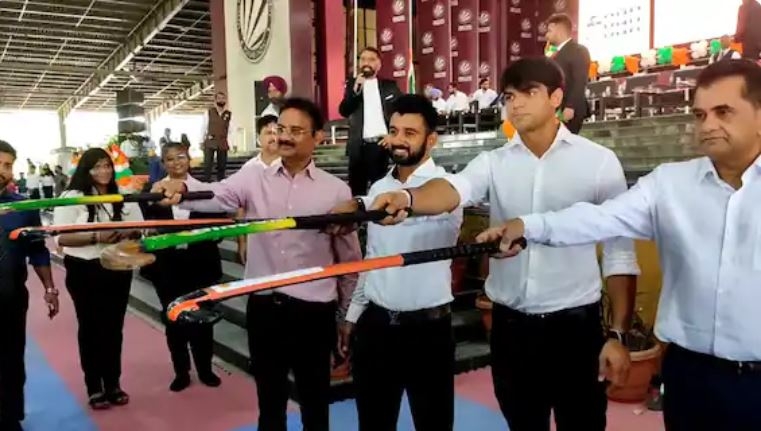 Jalandhar, August 31: The Lovely Professional University (LPU) on Tuesday felicitated 13 of its students, including Neeraj Chopra and 10 members of the Indian men's hockey team, for making India proud at the Tokyo Olympics.

While Neeraj Chopra was awarded Rs 50 lakh and a 'gold javelin' for winning the only gold for India in Tokyo, Manpreet Singh and nine other members of the hockey team received Rs 85 lakh. The university also announced a reward of Rs 10 lakh for bronze medal winner Bajrang Punia and Rs 25 lakh for paralympics high jump silver medal winner Nishad Kumar. Both are students of the university.

A ceremony was held on LPU campus to celebrate the return of its Olympic champions to their alma mater with NITI Aayog CEO Amitabh Kant as the chief guest.

Fourteen students of the university represented India at Tokyo Olympics and Paralympics in wrestling, hockey and athletics and the paralympics. Thirteen out of these 14 made India proud by winning medals.

"It is a proud feeling to come back to one's alma mater after winning gold at the Olympics. LPU and my faculty have supported me in every way possible way to help me achieve my dream of winning an Olympic gold for India. I am confident that the university will produce many more top-quality sportspersons who will win international laurels for India in the future," Neeraj said.

"I would like to take this moment to congratulate India's Olympic champions and their alma mater, LPU. They have brought joy and hope to millions of Indians. It is commendable to see the efforts that the university has put behind sports," Kant said.

LPU Chancellor Ashok Mittal said, "We are proud beyond words to have 13 of our students, including Neeraj, the men's hockey team members and Bajrang win medals at the Tokyo Olympics. They have made the whole nation proud with their achievements and their feat will motivate millions of youngsters across the country to believe in their ability and win more medals for India in the future."

The ceremony also saw interesting moments when the members of the Indian hockey team played a short commemorative hockey match along with Neeraj Chopra.

Post the match, Neeraj also demonstrated javelin throwing technique to the members of the hockey team.

He also played hockey with the Indian men's team. Watch video below: