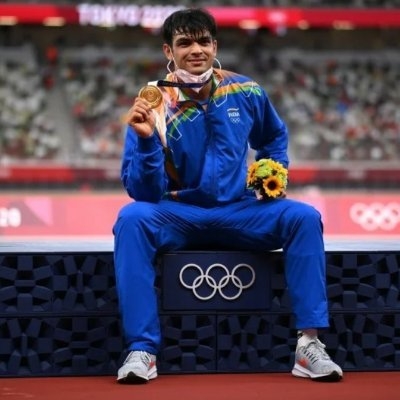 Tokyo Olympics gold medallist Neeraj Chopra might have won hearts with his performance at the showpiece event, but footage from moments leading up to the finals of the competition show Neeraj on the lookout for his javelin.

The video doing the rounds on social video further shows the Indian athlete spotting his javelin in the hands of Pakistan athlete Arshad Nadeem and then rushing towards him to take it back before his first attempt on the historic night.

While the turn of events leading into the throw didn't hamper Neeraj's prospects of winning the gold, many fans questioned the motive behind Nadeem picking "someone" else's javelin.

"In this video, Pakistan's Arshad Nadeem caught red handed with #NeerajChopra's Javelin. Why would anybody pick someone else's Javelin just before the throw? What was he even thinking?" one of the users tweeted.

Another user slammed Arshad Nadeem for his "unprofessional" behaviour.

Revealing what happened behind the scenes before Neeraj Chopra made it to finals at Tokyo 2020 Olympics in just one javelin throw, the athlete informed that he had to take his javelin back from Pakistan's Arshad Nadeem right before his act.

"I was searching for my javelin at the start of the final. I was not able to find it. Suddenly, I saw Arshad Nadeem was moving around with my javelin. Then I told him, 'Bhai give this javelin to me, it is my javelin! I have to throw with it'. He gave it back to me. That's why you must have seen I took my first throw hurriedly," Chopra was quoted as saying by Times of India.

Even though Chopra hasn't complained against Nadeem, many Indians have put allegations of stealing and tampering on the Pakistani athlete. Twitter is flooded with questions by Indian Twitterati about why Nadeem had Chopra's javelin.

Neither of the athletes have commented on the issue so far.