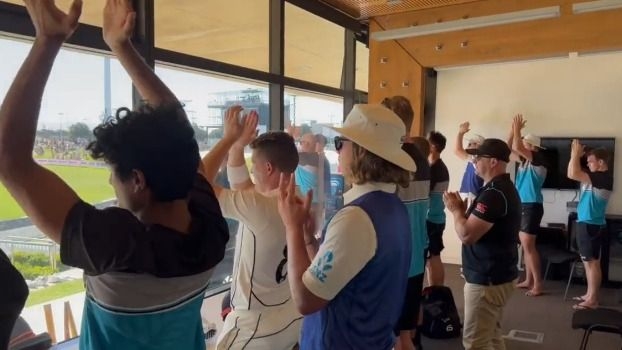 Devon Conway had an impressive day with the bat as New Zealand ended with a respectable score on Day 1 of the ongoing first Test against Bangladesh here at Bay Oval in Mount Maunganui on Saturday.

Conway brought up his century on the third ball of the 66th over, as he pulled a short delivery by Taskin Ahmed down to fine-leg for a single, then took off his helmet and raised his bat to celebrate his ton.

Such was the significance of the brilliant ton that his teammates stood up in the dressing room to give him a standing ovation. The New Zealand cricket team took to Twitter to share a video of the moment with the fans.

That Devon Conway 💯 moment from the viewing area 👀 #NZvBAN pic.twitter.com/dUlxUuinnE

Here is a video of the single which got Convay on his century on New Year's Day:

Devon Conway! A single to go to a 100 in his first Test in New Zealand. A special way to start 2022. Follow play LIVE with @sparknzsport. #NZvBAN pic.twitter.com/BHVNhjgmLE

Despite the loss of Latham for one in the fourth over of proceedings, the home side dominated the first two sessions of the day, largely through a partnership between a returning Conway (122) and Young (52) in the first home series Test of the World Championship cycle.

The pair put on 138, before Young was run out by Najmul Hossain Shanto.

Looking at the green tinge in the Bay Oval surface, the visiting team skipper Mominul Haque won the toss and elected to send the hosts in. Shoriful Islam struck first after Latham's bat-pad edge found wicket-keeper Liton Das, though the tourists looked tentative with the ball, as Young and Conway shouldered arms often in the first half an hour.

The pair scored just 14 runs in the first hour of play, with Taskin Ahmed bowling four maidens in his first five overs. The pair moved through the gears in the second hour, with Conway hitting two boundaries in the space of three balls to open the floodgates.

Young added a boundary of his own in the next over, and the pair ticked over the fifty-run partnership in the final half-an-hour of the session. Mominul turned to the spin of Mehidy Hasan Miraz, though the hosts held firm to reach 66/1 by lunch.

Young feathered a delivery from Shoriful behind to Das in the first over after lunch, though the edge was not picked up Bangladesh's slip cordon, and an appeal was not forthcoming. Replays showed the ball made contact with the bat, and Young made the most of the chance, building on the partnership with Conway.

Conway brought up his half-century with a six, while young reached the milestone with a sweep off Mehidy. The pair brought up their century-partnership in the meantime, as Mominul reflected on his decision to field with regret.

Mominul's Bangladesh were thrown a lifeline however, after the batting pair broke their own partnership with a poor piece of running. Wanting a quick single, Young was sent back, as Najmul Hossain Shanto's clean pick-up and throw to Das caught the right-hander just short of his ground.

The wicket brought Ross Taylor out to bat, in his final Test appearance at the Bay Oval. Off the mark with a flick into the leg-side, Taylor was watchful early in his knock, though made the most of two consecutive short and wide deliveries from Ebadot Hossain, crashing both of them through the off-side for boundaries.

At the other end, Conway crawled to his second Test century. Facing nearly 20 deliveries to move from 93 to 100, he brought up three figures with a pull into the leg side.

Taylor mistimed a drive to Shadman Islam on 31, though it was a rare blip in a strong day for the hosts. Conway continued on his charge with Henry Nicholls, as the pair added another 38.

Mominul brought himself into the attack, and his left-arm orthodox brought success, as Conway tickled an edge down the leg-side to Das on 122.

Tom Blundell and Nicholls looked like they had negotiated the new ball and the last hour of play, though Ebidot Hossain claimed Blundell on the last ball of the day, as the right-hander played onto his stumps.