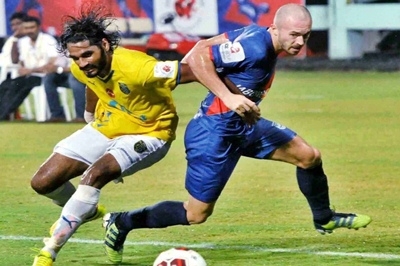 Kochi: With home team Kerala Blasters FC getting their campaign in the second season of the Indian Super League (ISL) off to a rousing start with a victory over North East United FC earlier this week, their next opponents Mumbai City FC will be determined to get back to winning ways.

Looking back on the performances of both teams in their opening outings, Mumbai — led by French star Nicholas Anelka — appeared to be unlucky as they enjoyed 54 percent of the ball possession and had more shots on goal, but still lost 1-3 to FC Pune City. Mumbai arrived here late on Thursday evening and as always in sports loving Kerala, the team was received well by the people who crowded the airport and team hotel to cheer them.

The hosts’ biggest advantage is that the football loving Keralites are always fully behind them. The stands are usually overflowing, with a record 60,000 fans attending their opening match of the season. Their foreign recruit Josu Currias appeared to be at his best and so were local boys Mohammed Rafi, Peter Carvalho, Sanchez Watt. Even with no big names, Kerala did well overall and after some initial hiccups, they were able to combine well to romp home to a 3-1 win.

Blasters coach Peter Taylor is wary of how effectively his side would be able to contain Anelka. Taylor has seen Anelka firing on all cylinders back in England, when the former French striker appeared for six leading English clubs including Arsenal, Chelsea, and Manchester City. But with rains beating down on this coastal city over the past two days and more rain predicted in the coming days, fans will have to keep their fingers crossed as a wet outfield would certainly hamper free flowing soccer.