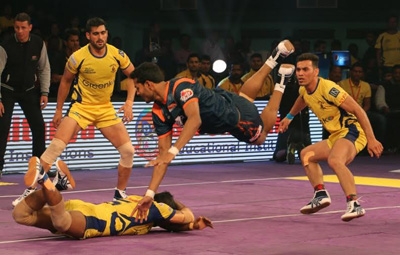 Vishakhapatnam : Bengal Warriors, strengthened in attack by the inclusion of army man Nitin Tomar, gave an impressive display with a 25-17 win over Telugu Titans in the concluding tie of the first leg of the Pro Kabaddi on Tuesday. The Kolkata-based outfit hadn’t performed well last season and the home team was expected to put it across by riding on the crowd support.

But Nitin dashed their hopes as he found an able ally in Mahesh Goud in attack. The duo turned the tide after the break when the two teams were tied 9-9. The match took a decisive turn after the defending pair of corner men, Captain Nilesh Shinde and Girish Ernak struck a purple patch.

For the home team nothing went right in all the departments. Rahul got only two points for a tally of four with two tackles in the match. Sukesh Hegde was also nowhere near his usual self, scoring just a solitary point in a do-or -die raid.

Girish who had 5 tackle points, teamed up so well with Nilesh (4 tackles) that within a space of two minutes the fate of the match was decided. From a slender 15-14 advantage in the 31st minute they went up 20-15. In the process they scored an all-out, the only one of the match in the 33rd minute of play. Nitin got rid of the dangerous Meraj Sheykh and Prashant Kumar Rai to register the all-out.

Girish then came up with two good frontal blocks and a double thigh hold to get rid of the Iranian Meraj and the Telugu Titans’ star raider Rahul Chaudhari to make it 22-15 with the last five minutes call given by the referee.