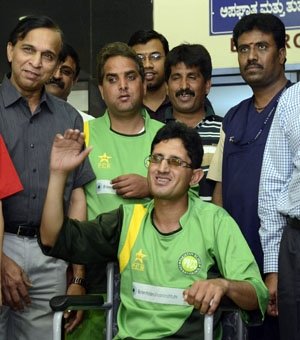 Bangalore : The negligence of a hotel room cleaning staff put the life of Pakistan’s Blind cricket team captain in danger as he was today hospitalised after accidentally drinking diluted phenyl in his room, mistaking it to be mineral water.

The 28-year-old partially visually impaired Zeshan Abbasi, here to play World Cup Cricket for the Blind, sipped the contents of a plastic bottle on the table as he mistook it for mineral water during breakfast, official sources said.

He was rushed to the multi-speciality MS Ramaiah Hospital where he was treated and kept under observation before being discharged a few hours later.

“Abbasi was discharged at 4.30 pm. He is absolutely fine”, President of the Hospital, Dr Shetty said.

Shetty said earlier Abbasi was subjected to endoscopy and certain tests and all reports were normal.

Pakistan High Commission in New Delhi has written to the Ministry of External Affairs regarding the issue.

All India Cricket Association for the Blind President, S P Nagesh, said the hotel management had tendered a written apology but they have been asked to investigate and “tell us how such a lapse occurred. We are awaiting their reply”.

Pakistan Team Manager Sultan Shah said “such an incident that has occurred accidentally should not and will not become an impediment in Indo-Pak cricket relations. We have a very good understanding with the team here and the tournament is being played in a very good atmosphere”.    “However, what we want to know from the hotel management who have orally apologised to us, is how such an incident happened and who is responsible for such negligence. It has to be ensured that such incidents do not recur. Otherwise, we are happy with the arrangements and are focused on the game”, he said.

A number of international Blind teams are currently in the city taking part in the Blind Cricket T20 World Cup. Apart from hosts India, Pakistan, Sri Lanka, Australia, England, Bangladesh, South Africa and West Indies are among the countries participating in the event which will conclude on December 13. Meanwhile, Syed Sultan Shah, President, WBCC and Chairman, Pakistan Blind Cricket Council, said they had already pardoned the hotel staff.