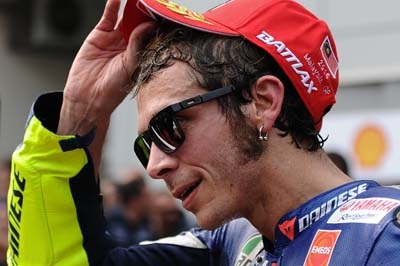 Kuala Lumpur : MotoGP championship leader Valentino Rossi will have to start his next race from the back of the grid as the Italian was penalised for kicking Marc Marquez off his bike during the Malaysian Grand Prix here on Sunday. The race was clinched by Dani Pedrosa of Honda while Jorge Lorenzo of Movistar Yamaha stood second. Rossi managed to grab hold of the third place but was slapped with three penalty points after a post-race investigation. The incident took place during the 13th lap after Rossi gestured something to Marquez. The final race of the season takes place in Spain on November 8 with Rossi leading Lorenzo by seven points. “Unfortunately, I lose a lot of time with Marc,” Rossi was quoted as saying by the BBC. “And in turn 14, I tried to go a bit wide to take a better line and make him slow. He came to me and I think he crashed in that moment.”

However, Lorenzo said after the race that he believes Rossi had kicked Marquez. “It’s clear that he took Marquez off,” Lorenzo said. Before the race, the 36-year-old Rossi had accused Marquez of deliberately trying to impede him during the Australian Grand Prix on October 18 in order to help Lorenzo. “Marquez did not play with both of us, he played only with me,” Rossi said. “He isn’t playing fair. He would prefer Lorenzo to win. He is angry at me for a personal matter.”