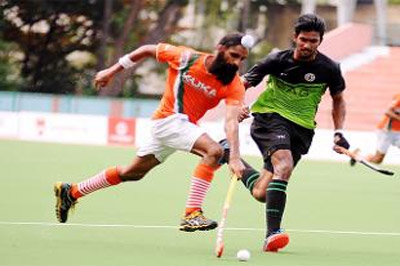 Chandigarh: A piece of Indian hockey’s golden history seems to have been lost for good courtesy the apathy of Sports Authority of India (SAI) officials, who have no clue about the priceless memorabilia donated way back in 1985 by legendary Olympian Balbir Singh Sr. The donated items, meant for a proposed museum which never came about, included an Olympic blazer, medals and rare pictures. The 91-year-old triple Olympic  gold-medallist maintains that in 1985, he had donated his medals and memorabilia to the then SAI Secretary on  being told that they would be displayed in a show window’ at the then proposed National Sports Museum.

Balbir Sr said he was later told that the Museum was to be opened in Delhi to inspire the youth of the nation. But an enquiry about the items before the 2012 London Olympics at the request of The Olympic Museum revealed that SAI officials were clueless about their whereabouts. Nearly a year back, Union Sports Minister Sarbananda Sonowal had visited Balbir Singh Sr at his residence in Chandigarh and SAI officials, while claiming ignorance about the entire matter, had promised a thorough enquiry. In the meanwhile, a group of lawyers from the Punjab and Haryana High Court came carried out RTI campaigns in the SAI offices of SAI in New Delhi and the National Institute of Sports (NIS), Patiala, which revealed some astonishing facts.

The RTI replies of these authorities revealed shocking mismatch of statements, but more importantly, also an affirmation of the fact that the articles were indeed received by these authorities from Balbir Singh Sr. Balbir Sr. had said that with the exception of his Olympic medals and the Padma Shri award, everything else — including his  captain’s Melbourne Olympic blazer, 36 medals including Tokyo Asiad (1958) silver, and over 100 rare photographs — were among the items to have been donated by the gold medal winner of London (1948), Helsinki (1952) and Melbourne (1956) Olympics.

According to Balbir’s maternal grandson, Kabir Bhomia, the International Olympic Committee’s Olympic Museum wanted the Melbourne Games blazer to be a part of the official London Olympics exhibition where he was the only Indian and the only Hockey player chosen among 16 icons across all participants in all disciplines in 116 years of the modern Olympics era. “That is when we contacted SAI to get that blazer as Nanaji (Balbir Sr.) had nothing with him in London apart from Olympic medals. But SAI officials said that they didn’t know about the whereabouts of the  treasure,” Kabir said.

Balbir scored five goals in India’s 6-1 victory over the Netherlands in the gold medal game of the 1952 Games. “It is a disgrace! These articles are a part of our national sporting heritage. If this can happen to the priceless memorabilia of the greatest player produced by India, then I don’t think it can be seen as just negligence, people have to be held accountable and it should be looked as a case of criminal conspiracy to steal from our great country the greatest chapter of our glorious sporting history after independence,” said sports sociologist and Balbir Sr’s associate Prof (Dr.) Sudesh Gupta.

According to Kabir, the first RTI in this matter was filed on December 9, 2014 with SAI and it contained one basic question as to whether there was a proposal to set up a National Sports Museum at Jawahar Lal Nehru Stadium at New Delhi. Questions were also asked pertaining to the status of articles received from Balbir Sr. The concerned authorities, in their reply sent to this RTI on January 5, 2015, stated that there was/is no proposal to set up a National Sports Museum at J L Nehru Stadium in New Delhi, and flatly denied having received any articles from the
legend. The second RTI was filed by the lawyers in the offices of NIS, Patiala on December 19, 2014 to which a reply was received on January 2, 2015 in which NIS acknowledged that it had received articles from J L Nehru Stadium, New Delhi to be displayed at NIS, Patiala.

“On further correspondence, NIS Patiala in its next RTI reply furnished a list of articles spanning 74 pages. This list, interestingly, did not mention any memorabilia/articles received from Balbir Singh Sr,” he said. In the meanwhile, dissatisfied by SAI’s reply to its first RTI, the lawyers filed an RTI appeal to the Appellate Authority of SAI, which was transferred by SAI to J L Nehru stadium, New Delhi. “The reply to this RTI appeal was received on March 19, 2015 and it left all of us shocked. This RTI reply revealed a list of items which were handed over by J L Nehru Stadium, to NIS Patiala in 1998. Item No 23 in this list clearly mentions that an Olympic blazer from 1956 Olympics was received from Balbir Singh Sr by J L Nehru stadium. This happens to be the same blazer which he wore as the only Indian to have been bestowed the honour of being flag bearer twice for the Indian Olympic contingent (1952 and 1956),” he said.

To make the findings more conclusive, another RTI was filed with J L Nehru stadium asking specifically whether or
not they received anything from Balibir Singh Sr. “A reply to this RTI was received on June 8, 2015 and it contained the same list of articles as were sent in previous replies. Item No 23 yet again mentioned blazer received from Balbir Singh Sr. “Apart from the missing blazer, there is still no clue about where the remaining articles donated by Balbir Singh Sr have vanished. These include 36 medals won by him at national and international level and 100 plus historic photographs. In fact, saving his three Olympic gold medals (1948, 1952 and 1956) he donated everything else he won to SAI for its proposed museum,” Kabir said.

Touching upon the contradictions in the RTI replies, he said, “these replies have revealed a shocking mismatch of statements among SAI, J L Nehru Stadium & NIS Patiala.” “While SAI, in its reply to the first RTI, totally rules out any past or present proposal to set up a sports museum, J L Nehru Stadium on the other hand not only affirms the existence of such sports museum but also provides a list of articles/memorabilia received to be displayed in it,” he claimed.

The Legend’s daughter Sushbir said, “We are shocked! We have been awaiting word from SAI since last year when the then Director General Jiji Thomson assured a thorough investigation. We will now explore other options to try to locate the missing articles.”