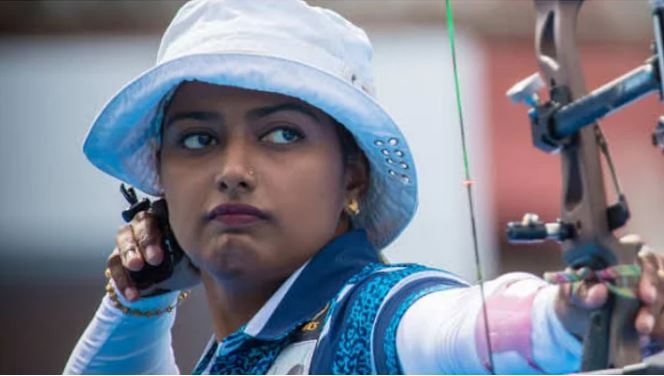 Tokyo: World No.1 Deepika Kumari was inconsistent but the male archers' performance was simply underwhelming in the Olympics' ranking rounds, prompting a rejig of India's mixed pair combination on a topsy-turvy day at the Yumenoshima Park here on Friday.

The Koreans, who stayed away from all International competitions in the build-up to the Olympics since 2019, reigned supreme, including a top-three finish in the women's section where young sensation An San shattered a 25-year-old Olympic record.

The Indian men's team of Atanu Das, Pravin Jadhav and Tarundeep Rai, however, did not post particularly impressive scores and just about managed to sneak into top 10 in the team rankings.

Deepika slipped from fourth at the halfway mark to finish ninth with 663 points which was way below her best International ranking score of 686.

"I feel my performance was good as well as bad...it was in between I would say," Deepika said.

Deepika's biggest challenge is likely to be in the last-eight where she might run into San who is making her Olympic debut.

Two years after she lost at the same venue to San at the 'Tokyo 2020 Test Event' here, Deepika would look to avenge her final defeat.

"I want to show my best performance here and I will show that in my next rounds," Deepika vowed to come back strong.

In fact, there will be Korea in waiting for the Indians in the quarterfinals of both men's team and mixed pair competition. The mixed tea, is the country's best bet to win an elusive Olympic medal in archery.

India had identical rankings of ninth in both men's team and mixed pair competitions.

Placed in the same half as India, top seed Korea will open their main event against 16th ranked Bangladesh.

The men's trio's combined performance was just enough to finish inside top-10 as they totalled 1961 for a ninth place finish in their first Olympic appearance since London 2012.

The Indian men's team had failed to qualify for the 2016 Rio Games and Das was the only male competitor in the individual section.

The Indian men's team might run into top seed Korea, who got a bye into the quarters, should they beat eighth-ranked Kazakhstan in the opening round.

In individual section, Jadhav will face 34th ranked Galsan Bazarzhapov of Russia, Das will take on Deng Yu-Cheng of Chinese Taipei, while Rai's opening challenge will be against Ukranian Oleksii Hunbin.

The Indian was sitting pretty at fourth place after the first half of the round, having shot 334, one point ahead of Korean heavyweight Kang Chae Wong.

But she slipped in the back-end and was woefully off the mark with two 53s in the eighth and penultimate end to slip behind as Mexican Alejandra Valencia climbed to the fourth place.