From Prime Minister Narendra Modi to Olympic gold medallist shooter Abhinav Bindra, the historic feat drew the attention of the political class, sporting fraternity, entertainment industry, and the corporate sector, among others

Former Asian badminton champion Dinesh Khanna on Sunday summed up the mood over India’s first-ever Thomas cup win, saying that it is akin to winning the 1983 cricket world cup. "It is absolutely fantastic. It is like winning the world cup in cricket for the first time. So, there is nothing greater than this win, as far as team championship for men in the sport is concerned,’’ said Khanna in an exclusive interview to ANI.

There was good reason for euphoria. For years India would turn up at the Thomas Cup, make up the numbers and watch from afar powerhouses like China, Indonesia, Japan, Malaysia and Denmark walk away with all the glory. This time too, nobody gave them a chance but self-belief of the players translated into unprecedented success.

First-time finalists India produced a mesmerising performance in the final to demolish Indonesia 3-0 and script history. The men had previously reached the semis in 1952, 1955, and 1979 while Indonesia are the most successful nation in the history of the tournament, with 14 titles to their name.

It all started with a bang -- 20-year-old Lakshya Sen beating Tokyo Olympics bronze medallist Anthony Ginting. As if to prove it was no flash in the pan, doubles stars Satwiksairaj Rankireddy and Chirag Shetty gave India a 2-0 lead by beating Mohammad Ahsan and Kevin Sanjaya Sukamuljo 18-21, 23-21, 21-19. And in a fitting finale, Kidambi Srikanth sealed India's historic win by outclassing Jonatan Christie 21-15, 23-21.

The country's badminton has been thus far synonymous with Prakash Padukone, Pullela Gopichand, Saina Nehwal and PV Sindhu, but this Thomas Cup triumph could redefine the sport from the Indian perspective.

India erupted in celebration after its maiden title triumph, with people from all walks of life joyfully exhausting their stock of superlatives to adorn Sunday's heroes. From Prime Minister Narendra Modi to Olympic gold medallist shooter Abhinav Bindra, the historic feat drew the attention of the political class, sporting fraternity, entertainment industry, and the corporate sector, among others.

Soon after the victory, Amitabh Bachchan took to social media to praise the team. "India! India!! India...!! #ThomasCup #TeamIndia #Proud," he posted on Twitter. "This is incredible!! Congratulations to #TeamIndia!! Historic moment," Anil Kapoor wrote alongside the pictures from the final.

It was the culmination of a splendid week. No wonder, Sports Minister Anurag Thakur lost no time in announcing a cash award of Rs 1 crore to the team. 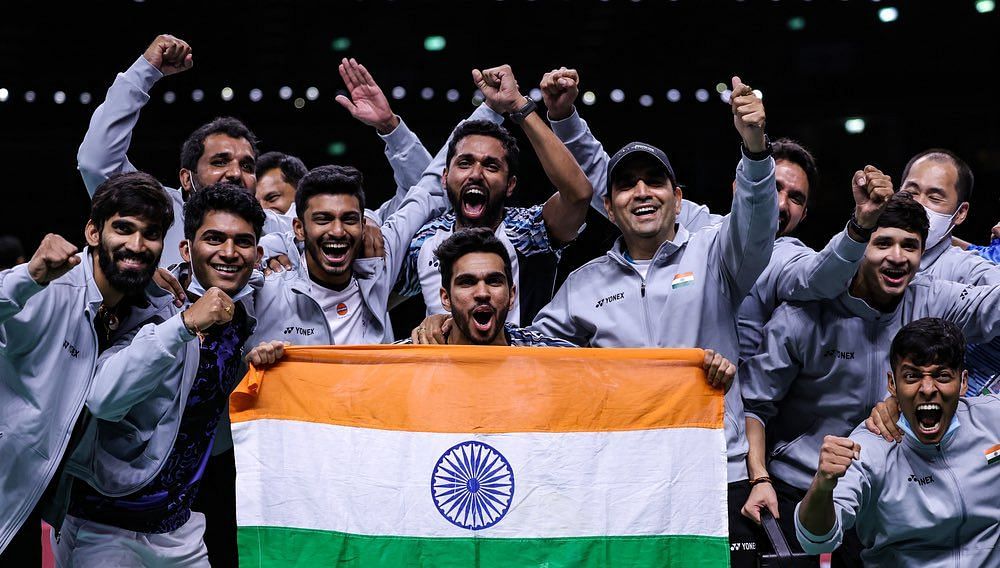