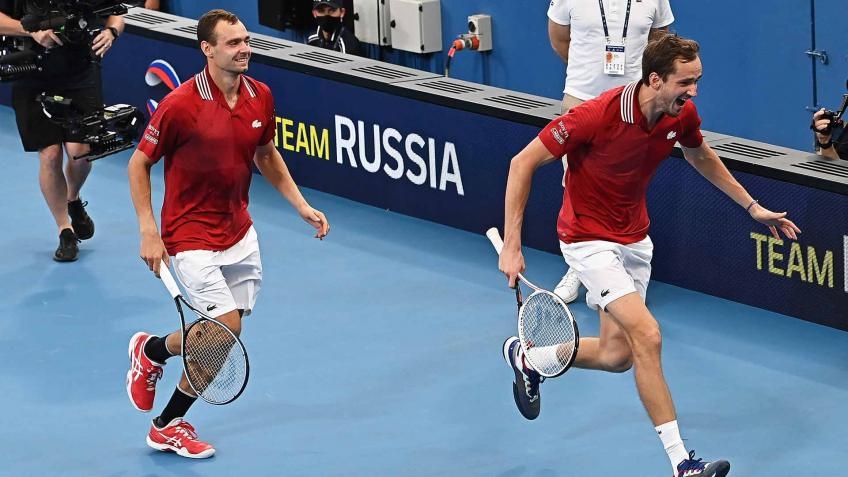 Roman Safiullin stepped up and delivered for Russia on Sunday at ATP Cup to help guide the reigning champion to victory against France in Group B in Sydney.

The World No. 167 backed up his singles victory over Arthur Rinderknech by teaming with World No. 2 Daniil Medvedev to overcome Fabrice Martin and Edouard Roger-Vasselin 6-4, 6-4 in 76 minutes in the deciding doubles match to give Russia a winning start at the 16-team event.

Earlier, World No. 35 Ugo Humbert and Team France seized on their late addition to ATP Cup by stunning Medvedev, who had led by a set and 3-0, to draw level with Russia on Day 2.

Humbert was rewarded for his high-risk/high-reward strategy as he unleashed a cavalcade of ferocious left-handed forehands that eventually won the day 6-7(5), 7-5 7-6(2) against Medvedev's deep-court defense.

"It was a very tough match. I am very happy," Humbert said. "I had some opportunities in the first set and I just tried to stay relaxed and focus on what I had to do. It was a great match." Humbert crushed 44 winners to Medvedev's 28 during the match, unsettling the Russian, who also made an uncharacteristic 44 unforced errors, including seven double faults. Humbert was also effective at net, winning 23 of 32 approaches during the two-hour, 55-minute encounter.

Humbert also won his only other meeting with Medvedev, on clay in Hamburg in 2020.

In the first match of the tie on Ken Rosewall Arena, unheralded Russian Safiullin seized his opportunity to play a starring role at ATP Cup, rallying from a set down to give Russia the lead.

The 24-year-old Safiullin, who got his opportunity to play following the withdrawals of Andrey Rublev and Aslan Karatsev, raised his game to topple Frenchman Rinderknech 2-6, 7-5, 6-3 in the No. 2 singles.

Safiullin came up clutch in pressure moments, saving 15 of 19 break points he faced in the two-hour, 26-minute contest.

"It feels great to win the first match, to get the point for the team and now we wait for Daniil to go out and show his tennis," Safiullin said. "The second set was really tight and I tried to make as many balls as I could and put pressure on him.

"Before the match, Daniil said to go out and play with no pressure, just to play my best and fight for every point." ATP Cup format sees the No. 2 singles played first, with the No. 1 singles following. Doubles, with no-ad scoring and a match tie-break in place of a third set, is the final rubber of the tie.