An all-round Namibia pulled off an upset for ages after defeating Asia Cup 2022 champions Sri Lanka by 55 runs in their Group A, round one match of ICC T20 World Cup 2022 at Geelong on Sunday.

This day will be one to remember for Namibia as the win was not a close one by any means, but rather a highly comprehensive one. Be it late death over 68-run stand between Frylinck (44) and Smit (31*) or electric fielding and bowling performances, Namibia outplayed Lankans in every department.

Dhananjaya de Silva was joined by hard-hitting Bhanuka Rajapaksa and they took Sri Lanka through the remainder of their powerplay safely. SL was at 38/3 in six overs, with Silva (11*) and Rajapaksa (9*) at the crease.

Medium-pace continued its domination in Lanka's innings as Jan Frylinck joined the party, dismissing Silva for 12 off 11 balls after being caught by Shikongo at deep backward square leg. Sri Lanka was 40/4.

Dasun Shanaka, the skipper joined Rajapaksa and they had to do some heavy repair works. The duo kept the scoreboard ticking and took Sri Lanka halfway through the innings safely. After 10 overs, Sri Lanka was at 72/4, with Rajapaksa (19*) and Shanaka (22*). It seemed Sri Lanka could bounce back in the match.

Just when things looked safe for SL, spinner Bernard Scholtz gave twin jolts to the Asia Cup champions, sending back Rajapaksa (20) and Wanindu Hasaranga (4). Frylinck also got his second wicket of the match, sending back skipper Shanaka for 29 off 23 balls.

The Asia Cup champs looked in a huge trouble, 7 down for just 88 runs in 14 overs. They needed to swing big, but with caution as 76 off 36 balls were needed, with only three wickets in hand.

Pramod Madushan was run out for a duck by Michael van Lingen and wicketkeeper Zane Green. SL sunk to 88/8 and Namibia was just two wickets away from pulling off a huge upset.

Chamika Karunaratne (5) and Dushmantha Chameera (8) gave away their wickets owing to poor shot selection and Namibia pulled off a memorable victory against the recently-crowned Asia Cup champions. SL was bundled out for 108 in 19 overs and lost the game by 55 runs.

Scholtz (2/18) and David Wiese (2/16) were the standout bowlers for Namibia. Shikongo and Frylinck took two wickets. Smit took a wicket too.

Earlier, a late flourish from Jan Frylinck and JJ Smit helped Namibia reach a solid 163/7 against Sri Lanka in their Group A, round one match in ICC T20 World Cup 2022 at Simonds Stadium on Sunday.

Namibia displayed some solid intent throughout their innings but it came at cost of their wickets. Sri Lanka had their opponents restricted at 95/6 in 15 overs but Frylinck (44 off 28) and Smit (31* off 16) stitched a 69-run stand to help their side reach a competitive total.

Put to bat first by Sri Lanka, Namibia was off to a shaky start. Openers Michael van Lingen (3) and Divan la Cock (9) were sent back to the pavilion by pacers Dushmantha Chameera and Pramod Madushan. It reduced Namibia to 16/2 in 3 overs.

Jan Nicol Loftie-Eaton and Stephan Baard were the fresh pair and they started to rebuild the innings. Eaton had the honour of hitting the first-ever six of the tournament, smashing Chameera over the fine leg boundary in the fourth over.

Eaton continued to bat with attacking intent, smashing Chamika Karunaratne for a four and a six. Karunaratne however had the last laugh, dismissing Eaton for short, but entertaining 20 off 12 balls. A promising partnership was cut short at just 19 runs.

Skipper Gerhard Erasmus was the next batter on the crease, with a responsibility to take his side to the second half of the innings without any further damage. At the end of the powerplay in six overs, Namibia was at 43/3, with Erasmus (3*) and Baard (7*) at the crease. The intent was shown in the powerplay, but it cost wickets. Sri Lanka on the other hand set a standard with their athletic fielding and tight bowling.

The duo had built quite a solid partnership for their side and found a way to score runs with consistent strike rotation and converting singles into doubles. Just when it seemed that they would switch gears, Erasmus was dismissed for a 24-ball 20, without any boundary or six. Spinner Wanindu Hasaranga got his first wicket as a top edge went into the hands of Gunathilaka at deep midwicket. With this, ended a 41-run stand between the duo and Namibia was at 76/4.

Jan Frylinck joined Baard. An incredible diving catch from Dhananjaya de Silva at deep backward square leg ended Baard's knock of 26 off 24 balls. Half of Namibia's batting lineup was in the pavilion at 91 runs.

An experienced David Wiese was next up on the crease and was expected to give some solid finishing touches, but he edged a delivery from spinner Maheesh Theekshana that went straight into the hands of wicketkeeper Kusal Mendis. Wiese was gone for a duck.

Smit and Frylink started to attack Sri Lankan bowlers and 37 runs came in the next three overs. Karunaratne seemed to be the worst sufferer, smashed for 16 runs in the 18th over. The duo found ways to put runs on the board despite Wiese's dismissal, putting on 50 runs in just 27 balls.

They also helped their side reach the 150-run mark in 19 overs, something which looked doubtful a few balls back. Namibia finished their innings at 163/7, fetching 68 runs in the last five overs. Frylinck was out for 44 off 28 on the final ball while Smit stayed unbeaten at 31.Pramod Madushan (2/37) was the leading bowler for Sri Lanka. Theekshana, Karunaratne, Hasaranga and Chameera also got a wicket each. 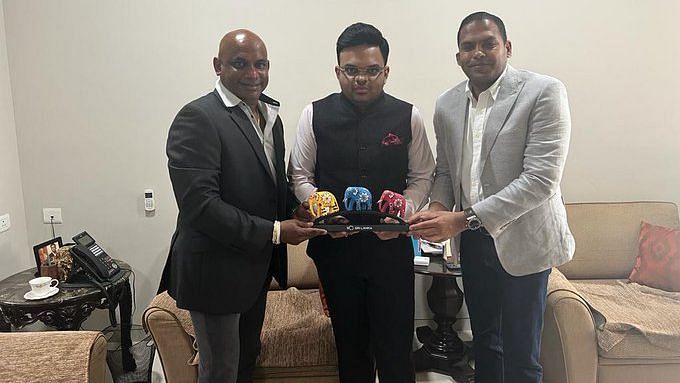