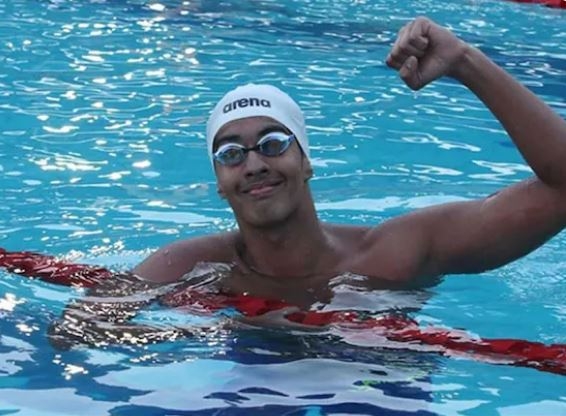 Sambhavv R of Karnataka bettered Olympian Srihari Nataraj's three-year-old national record in 200m freestyle for group I boys as the 37th Sub Junior and 47th Junior National Aquatic Championships got off to a rollicking start here at the Basavangudi Aquatic Centre, on Tuesday.

Four national records were bettered on the opening day of the event by swimmers from Karnataka with Sambhavv setting the ball rolling.

He maintained a good pace right from the start and was well ahead of Aneesh S Gowda, also from Karnataka who fought hard in the last 50m but was a tad slower in his finish as he touched pads at 1:53.54 seconds. Vedaant Madhavan of Maharashtra took home the bronze with a time of 1:55.93 seconds.

Delighted over setting a national record in 200m freestyle, an elated Sambhavv said, "I am very thrilled to break Srihari's record. It was a good race and Aneesh really pushed me particularly in the last 50m."

Sambhavv will also take part in 50m and 100m freestyle and 50m and 100m butterfly and is surely the one to watch out for.

One of the most exciting races of the day was 200m individual medley for group 1 boys which was closely fought between Swadesh Mondal of Bengal and Shoan Ganguly of Karnataka. While Shoan was well ahead after the first 50 as butterfly is his pet event, Mondal caught up in the backstroke leg and took lead in the third 50m swimming breaststroke.

Although Shoan made a frantic effort in the last 50m swimming the freestyle, Mondal touched first with a time of 2:08.88 and Shoan clocked 2:09.05 to settle for silver. Both the swimmers clocked well within the national record time of 2:10.26 created in 2018 held by Neel Roy of Maharashtra. Kalp S Bohra of Karnataka won the bronze in this event with a time of 2:12.61, the organisers informed in a release on Tuesday.

In the 200m freestyle for group III girls, Dhinidhi Desinghu of Karnataka broke an 11-year-old national record (created in 2010) of 2:17.52 held by Monique Gandhi of Maharashtra. Dhinidhi, who trains at the Dolphin Aquatics under head coach Nihar Ameen, clocked 2:14.94 seconds to win the gold while Aditi Hegde of Maharashtra settled for silver with a time of 2:23.93 and Shakthi Ishwar Prasad of Tamil Nadu Swimming Academy clocked 2:24.77 to take home the bronze medal.

Speaking about her race, Dhinidhi sa'd, "I really wasn't expecting a record. But certainly, feels good to break one that too an 11-year-old record. I am looking forward to my other races and have 400m freestyle tomorrow."