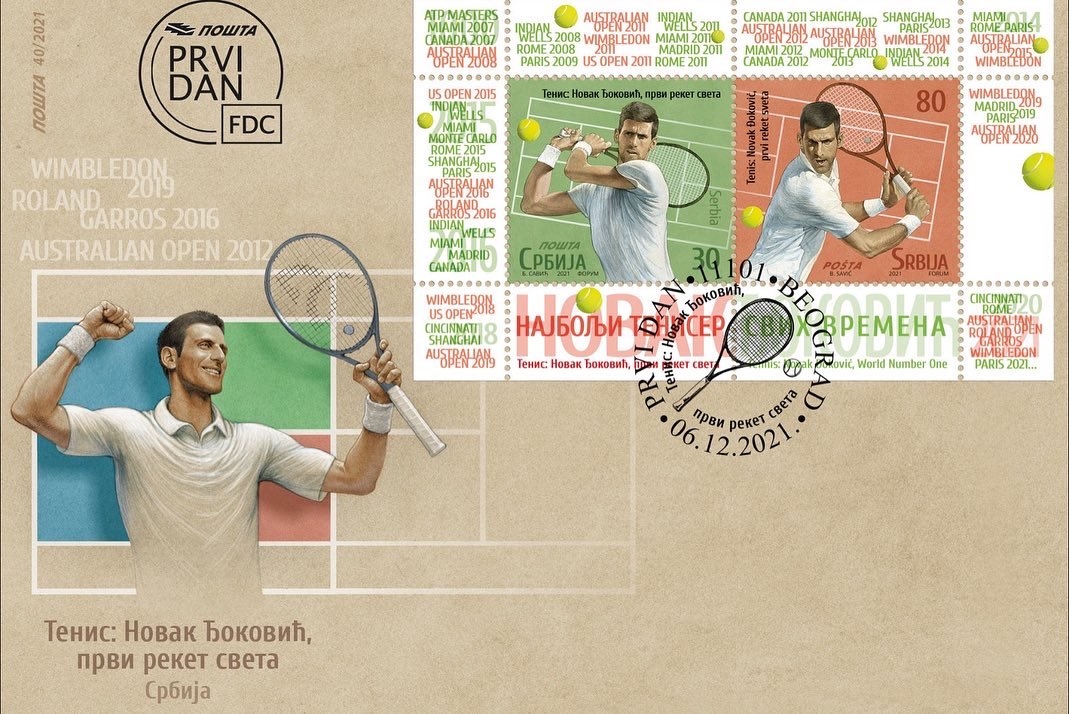 World No.1 tennis player Novak Djokovic has got a huge recognition from his country, Serbia, which has recognised his achievement by issuing a postage stamp – for mailing letters both nationally and internationally – which is a first for any athlete from the country.

Djokovic, who has so far won 20 majors, made history recently by securing the year-end No. 1 ATP ranking for a record seventh time, breaking the tie with American legend Pete Sampras.

He has also won three majors this year – Australian Open, French Open and Wimbledon – though he missed out on the US Open title after losing to Russian Daniil Medvedev in the final.

“(It is) an honour to receive my very own Serbian stamp. Thank you to my generous country for this rare gift! I'm humbled!!” Djokovic tweeted on Friday. “Excited to share we’ll partner with the Serbian National Postal Service on Novak Djokovic Foundation projects for every child to have the opportunity to attend preschool.

“Gratitude for everyone that brought this together. Now Jelena Djokovic and I will take some stamps home for the kids to write to Santa,” added the world No. 1, who has not yet announced whether he would fly to Melbourne to defend his Australian Open title next year although his name figures in the draw list along with Spaniard Rafael Nadal.

“Thank you to the Post of Serbia for this initiative, which I experienced as an effort to revive the tradition of writing letters and postcards, and I am glad to be able to contribute to that,” Djokovic said according to the Novak Djokovic Foundation's website.

“Our Foundation receives many letters every day from children and their teachers throughout Serbia, who need help and support in early development and education.

“We want, and we are committed to that every day, that in the next 10 years, every child in Serbia has access to kindergarten and the conditions to dream and realise their dreams. Together we will try to get the results as soon as possible, and we are glad that more and more partners are joining us, including the Post of Serbia.”

The artwork was done by Boban Savic, with references to some of Djokovic's greatest accomplishments, including his 37 ATP Masters 1000 titles and 20 major triumphs, according to atptour.com.