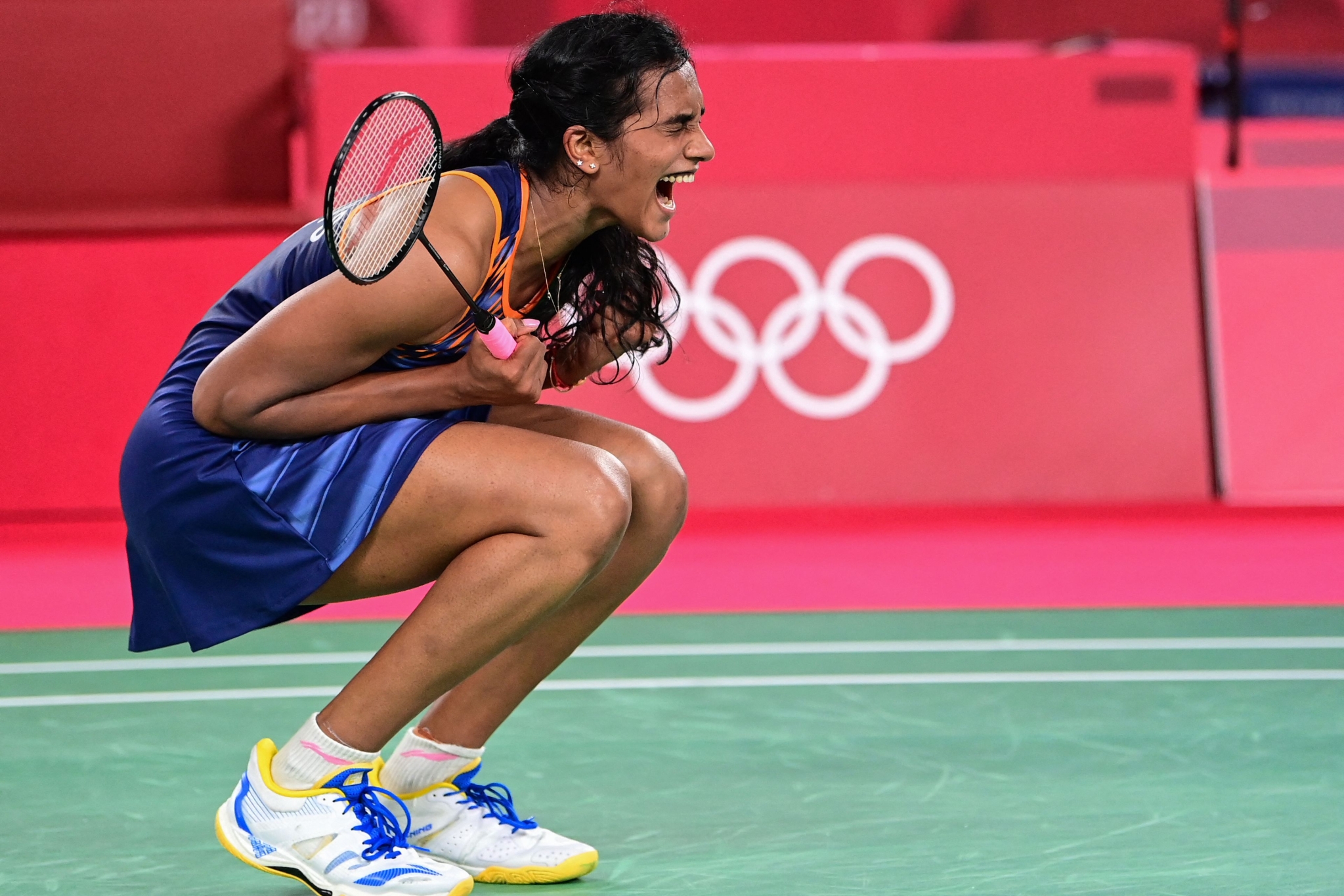 Mumbai: The silver medal looks to turn gold for the Indian star badminton player PV Sindhu as she went about like a champion in her Tokyo campaign on Friday.

However, she had to keep her nerve before pulling off a 21-13, 22-20 win against the stubborn world No. 5 Japanese Akane Yamaguchi, for a place in the semi-final.

“She is a champion and will deliver when it matters the most,” said Gopichand before the players could board the flight to Tokyo.

And it is all there, as Sindhu is just two steps away from making it happen.

If the first game was any indication that the Indian was much superior, the Japanese Yamaguchi had other plans up her sleeves, as she took the second game to the wire before surrendering 20-22, in the match, which witnessed one of the longest rallies (54 shots).

At the end, it was all over in 56 minutes for the hosts' challenger Yamaguchi as she could not get the shuttle over the net for a grunting Sindhu to celebrate, keeping India's hopes of a first-ever Olympic gold in badminton alive.

The 26-year-old Indian, was cantering 15-9 on board, but Akane bounced back pocketing ten points and taking the lead in the match for the first time 16-15.

"The first game was mostly under my control. I was gaining the lead but I didn't take it easy because in her previous matches she came back. But I maintained the lead and finished it off," said Sindhu.

From then, the game went on even ground with players snatching leads. It was the Japanese who took a slight edge, as she had two game points, but Sindhu was not one to give up, as she snatched the game and the match 22-20.

"In the second game I was leading but then she came back. But I still fought back, I never lost hope and I continued with the same tempo. I am very much happy with the way I controlled the shuttle, not many errors," she added.

At the Musashino Forest Plaza, here on Friday, the silver medallist at the 2016 Rio Olympics, defended brilliantly and rode on her attacking all-round game to outclass the fourth-seeded Akane.

The sixth-seeded Indian came into the match with a 11-7 head-to-head count against the Japanese, whom she had last beaten at the All England Championship in March this year.

Sindhu used her forecourt well and took charge of the net. The duo played some good rallies at a good pace but Yamaguchi couldn't find an answer in the exchanges. The Japanese was also too erratic.

Sindhu eventually produced a winner near the net and grabbed the first game when Yamaguchi sent long a return to serve.

Sindhu dictated the pace and seemed in total control, starting the second game with two superb smashes for a 2-0 early lead.

She kept her unforced errors to the bare minimum even as Yamaguchi committed a service error and playing against the drift, struggled to keep the shuttle in.

A superb net dribble and a cross-court smash helped Sindhu to again take a five-point advantage at the break.

Indians at the Tokyo Games

Deepika Kumari beat Ksenia Perova (Russian Olympic Committee) 6-5 (10-7) in a shoot-off in the pre-quarterfinals of the women's individual event; lost to An San of South Korea 0-6 in the quarterfinals.

Anirban Lahiri tied 20th and Udayan Mane tied 57th after the second round of the men's individual stroke play, which was suspended due to persistent thunderstorms.

India beat Ireland 1-0 in the women's Pool A match.

India beat Japan 5-3 in their final men's Pool A match, progress to the quarterfinals.

Manu Bhaker and Rahi Sarnobat finish 15th and 32nd in women's 25m pistol qualification after the rapid round, fail to advance to the final.

India in action on Saturday