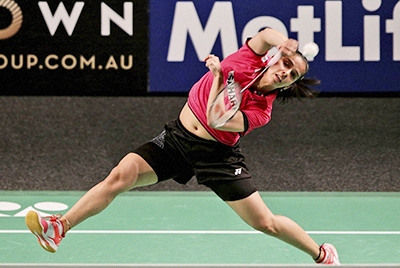 Sydney : India’s campaign in the $750,000 Australian Open Superseries ended as World No.1 women’s singles shuttler Saina Nehwal was outplayed 15-21, 13-21 by China’s Shixian Wang in the quarter-finals here on Friday.

Defending champion Saina failed to produce her best game at the Sydney Olympic Park and was outplayed in 42 minutes by former world No.1 Shixian, who also equalled her head-to-head record against the 25-year-old Hyderabadi at 6-all.

The first game was a neck-to-neck affair till the five-point mark before Shixian started to show that she is the better shuttler on the day. Shixian’s good show was matched by Saina up to some extent but the chinese was better on the attack and got ahead before the Indian got into groove and equalised at 14-14.

But Shixian’s flawless game not only pressurised Saina but also gave her six straight points that gave her a 21-15 win in the first game.

At the start of the second game too, 2010 Asian Games champion Shixian continued her dominance and held a 6-3 lead before Saina equalised at 8-all. London Olympic bronze medallist Saina managed to hold a one point lead at 10-9 before Shixian was able to break away by taking five points on the trot.

Shixian, bronze medallist in the 2010 World Championships, raced away to invincible 18-11 lead as the 25-year-old Chinese collected four consecutive points against Saina, who made a lot of judgement errors.

After Saina bagged two straight points, a ruthless Shixian shut the door on Saina’s title defence by killing off the game with three straight points to win the game 21-13.