Sachin back at the grind, asks Zaheer to bowl at him 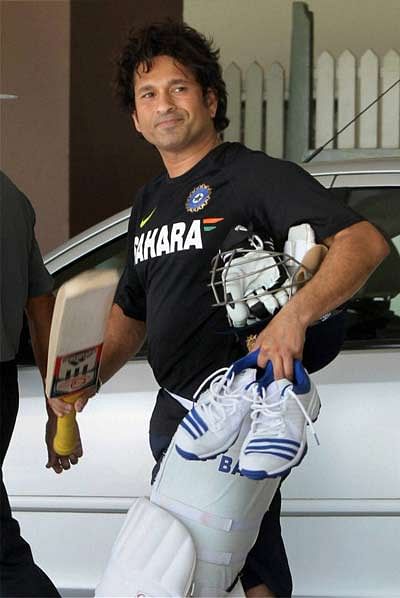 Tendulkar arrived in Bangalore from Mumbai on Wednesday morning and came to the NCA around 1: 30 pm.

After a brief chat with the NCA physio, Tendulkar started practice by asking Zaheer Khan, who has been undergoing training here for last few days, to bowl at him. Tendulkar chose to bat on fast- paced pitch. Tendulkar also wished millions of his countrymen on 65th Independence Day celebration and reminisced scoring his first Test century on the same occasion in 1990.

‘Happy Independence Day ( to all countrymen). It is 65th anniversary. It is a wonderful occasion and hope we keep progressing,’Tendulkar told reporters after a net session.

‘It is a co- incident. What can I do? Wonderful memories,’he quipped.

The first Test will begin in Hyderabad on August 23 while the second and final match is scheduled at Bangalore from August 31. The two teams will also play two Twenty20 match after the Test series.

The first T20 is slated for September 8 in Visakhapatnam while the second will be played in Chennai on September 11.

HomeSportsSachin back at the grind, asks Zaheer to bowl at him