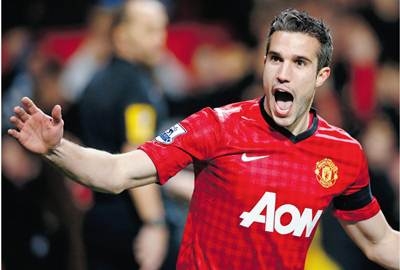 London: Robin van Persie admits his form has been poor this season and says he does not know if Manchester United will keep him after his contract ends in 18 months. Van Persie’s close relationship with Louis van Gaal was tested to the limit in the first half of the campaign and the United manager considered dropping him after a “very bad game” against Arsenal in November, reports dailymail.co.uk.

The Dutch striker’s form has improved since but he has scored only eight goals and missed one of the few chances United created in Friday’s goalless draw at Cambridge United in the FA Cup fourth round. Van Persie, who fired United to the title with 26 Premier League goals after moving to Old Trafford for 24 million pounds in 2012, admits he can do much better and revealed that he is constantly questioning his contribution to the team.

“This year I have played something like 20 games and I have scored eight goals – I am not happy with that. I want to score more. I will do everything, every day in training and during the games, I will keep doing what I have been doing for the last 10 years to make those goals. “Obviously we are not scoring enough goals, including me. I have to be honest. I think everyone in the team is responsible. Everyone feels responsible. I do definitely,” he said Monday.

Persie will turn 32 in August and is out of contract at Old Trafford in the summer of 2016. United are yet to open talks over a new deal and he admits that the situation is out of his hands. “It is not up to me. For the moment I am staying here for 18 months,” he said. “That is it really. I can’t look into the future. I don’t know what is going to happen after that. We shall have to wait and see.”