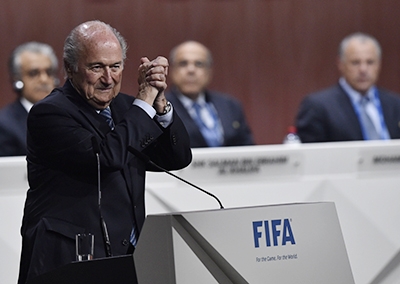 Sepp Blatter, who has been at FIFA for 40 years, 17 as its president, went into the vote revered by some as the beautiful game's 'Jesus' and scorned by others as a rogue clinging to power. |

Zurich : A new election triumph in the midst of a corruption scandal established FIFA president Sepp Blatter as the politician who can come through any storm.

And Blatter knows that he still has a long way to go to reach the aim he outlined Friday of getting FIFA in a safe port “where the boats will stop rocking.”

“He sees it all like a marathon. And he is one of the most determined men you will meet,” said one FIFA executive member about the 79-year-old Swiss official.

Blatter, who has been at FIFA for 40 years, 17 as its president, went into the vote revered by some as the beautiful game’s ‘Jesus’ and scorned by others as a rogue clinging to power.

The arrest on Wednesday of seven FIFA officials wanted by US authorities for accepting tens of millions of dollars of bribes seemed like a hammer blow to the veteran sports baron.

[alert type=”e.g. warning, danger, success, info” title=””]In my 40 years at FIFA I have learned  to live with hostility and resentment. However as the German language proverb puts it: sympathy is free, but envy must be earned Sepp Blatter FIFA president[/alert]

But he came through allegations about ‘brown envelopes’ handed out before his first election in 1998 and the collapse of the ISL sports marketing empire.

This week, Blatter’s power base in Africa and Asia remained firm. Blatter said people around the world unfairly held him “ultimately responsible” for everything that goes on in football and a fifth term was won.

Blatter believes however that his jealous rivals no longer apply the notion of fair play in their backroom battles with him. He told the Congress he had a “question” about the timing of the arrests, two days before the election. “In my 40 years at FIFA I have learned to live with hostility and resentment,” he said recently.

“However as the German language proverb puts it: sympathy is free, but envy must be earned.”

There is a lot to envy.

Blatter is in 70th place on the Forbes list of the world’s most powerful people behind the likes of Vladimir Putin and Barack Obama.

The former amateur footballer joined FIFA in 1975 from a position marketing Swiss watches. He became secretary general in 1981 and was elected to the top job in 1998 after another controversial president, Brazilian Joao Havelange, finally ended his 24 year reign.

Blatter claims credit for building FIFA’s financial muscle — $1.5 billion in cash reserves. When he joined FIFA it was in a small Zurich building with about 10 staff. One story says that it was Blatter who went to the bank to get a loan when they could not be paid. But FIFA made about $5.7 billion (5.3 billion euros) in the four years between the 2010 and 2014 World Cups and now has about 1,400 staff.

The workaholic Blatter says his main achievement has been to make football “universal” — the first World Cups in Asia (South Korea and Japan in 2002 although the decision was taken before he became president) and Africa (2010) came in his tenure.

Hundreds of millions of dollars are given to national federations and in development grants. But since the day he took office, accusations of skulduggery have never been far away from FIFA. In recent months, he has been fighting allegations about the awarding of the 2018 and 2022 World Cups to Russia and Qatar.

Blatter also told UEFA, the European confederation in 2011 that if elected then it would be his last term. But the FIFA president has never been implicated in wrongdoing and he has always shrugged off controversy — apart from one episode in 2006 when he tried to stop a book on FIFA being published in Switzerland. And so the football world is divided.

Asia and Africa declared strong public support for Blatter against his challenger Prince Ali bin al Hussein, brother of Jordan’s monarch. But Europe has turned against him. UEFA leader Michel Platini says Blatter lied when he said in 2011 that he would stand down this time.

Platini says Blatter made some good decisions “often in difficult circumstances” but that now he cannot face a life of “emptiness” without FIFA’s power.

Four years ago, Blatter thought it was his last mandate, he told reporters recently. But “times change”, he added.

Why does he keep getting re-elected? “He has a way of making people dependent or indebted to him, but not in a way that people regret it,” one Blatter confidant told AFP. “These people know where they are with Blatter. They don’t know where they will be with someone else.” —AFP

Zurich: The FIFA Congress on Friday approved the creation of a mechanism to verify if Israel poses obstacles to Palestinian football and it will also devote time to the issue of teams from illegal settlements in the occupied Palestinian territories that play in the Israeli Premier League.

Of the 209 national football associations present, 168 voted in favour of the Palestinian initiative, 18 against, while the rest abstained. Minutes before that vote, Palestinian Football Association (PFA) dropped its request to suspend its Israeli counterpart, reports Efe.