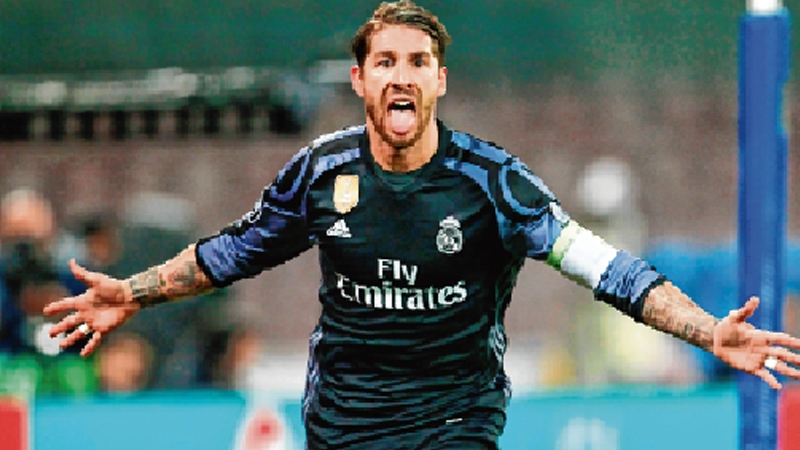 Real, who took a commanding 3-1 first leg lead at the Santiago Bernabeu last month, looked to be facing a tough night in Naples after Dries Mertens finished off a great attacking move to give the hosts a 24th minute lead.

But Napoli coach Maurizio Sarri had warned of the threat from the “world’s richest club, with the best players” a day earlier.

Ramos rose to head Real level six minutes after the restart and a second header which deflected off Mertens at Pepe Reina’s near post gave the Spaniards a 2-1 lead by the 57th minute.

Napoli saw late claims for a penalty waved away when Mertens tumbled in the box and suffered more woe in the first minute of added-on time when ex-Juventus striker Alvaro Morata came off the bench to hit their third for a 6-2 aggregate score.

Napoli required nothing short of a miracle if they were to reach the last eight for the first time — although a bright opening reflected a growing belief in the football-mad southern city the Azzurri could cause an upset.

Maurizio Sarri’s men had 11 shots in the opening period, the most Real had seen in a Champions League game since facing 15 against Juventus in 2013.

Mertens’s deflected shot flew over the bar for a corner after Amadou Diawara’s inch-perfect pass early on. But Napoli saw captain Marek Hamsik, Lorenzo Insigne and Mertens fail to beat Keylor Navas in the Real net before before the Belgium midfielder sent the stadium into raptures.

On Real’s first real foray, Luka Modric outmanoeuvred Kalidou Koulibaly to deliver a back-post cross that Reina collected after a mix-up between Ronaldo and Karim Benzema.

Insigne, who caught out Real with a long-range drive in Madrid, came close to another long-distance goal with a dipping shot from 35 yards that forced Navas down low at his near post.

Gareth Bale escaped down the right to deliver a cross that Kroos, from the edge of the area, volleyed straight at Reina. But Real were left ball-watching on 24 minutes after a slick passing move between Hamsik and Mertens that saw the Belgian run in to beat Navas at his bottom left corner. The San Paolo erupted, but relief reigned moments later when Ronaldo rounded Reina to see his low drive come off the base of the post.

Napoli could have had a second but after being sent though by Mertens, Hamsik fired high and wide before seeing his shot from the right byeline blocked by Navas.

When Hamsik gave away possession minutes after the restart, Toni Kroos’s dangerous cross to the back post was cleared by the head of Mertens.

But danger of Hamsik’s error became apparent when Ramos rose to meet Kroos’s corner to stretch the back of the Napoli net. After Allan was cautioned for a challenge that left Casemiro writhing in pain, the Brazilian was replaced by Marko Rog.

But Napoli’s dream died a minute later. Kroos delivered again from the corner flag and Ramos’s glancing header at the near post came off Mertens to leave Reina rooted to the spot. Napoli hit back, Rog setting up Hamsik for a cross that Navas got down low to smother. As Napoli tired in the closing minutes, Morata ran in to meet the rebound after Reina spilled a Ronaldo strike.