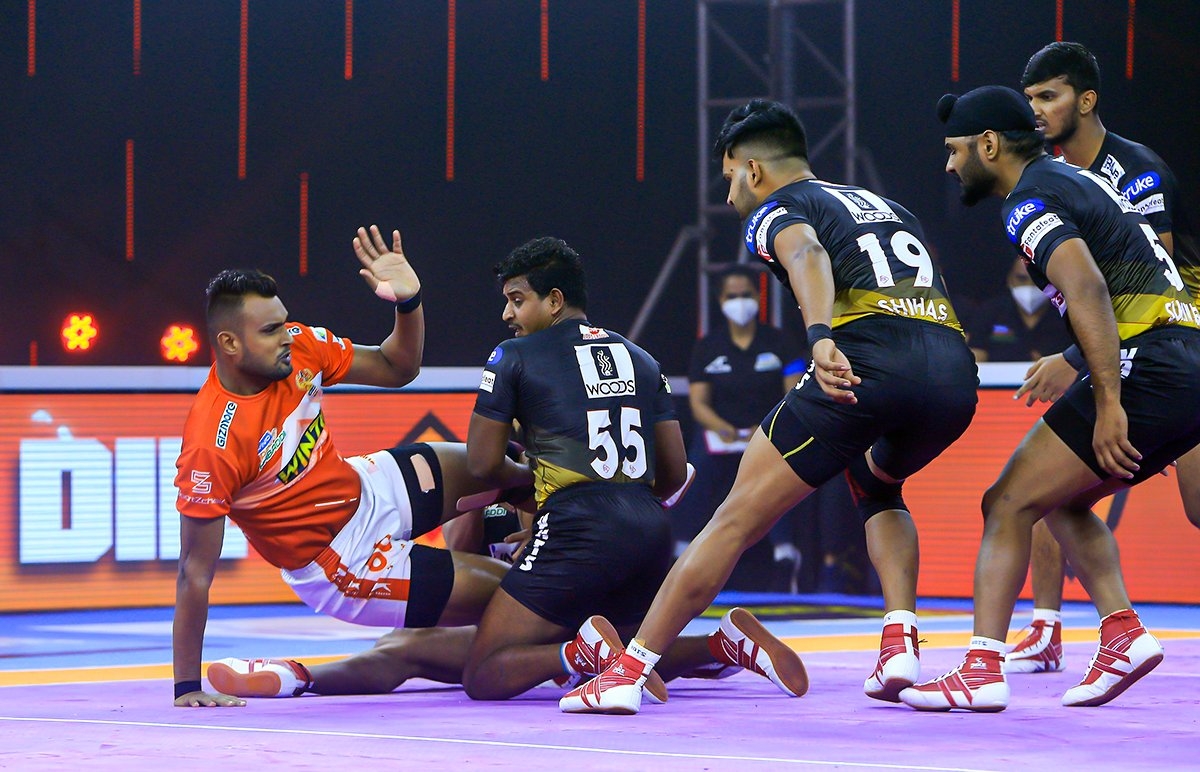 Rakesh was once again the star for Gujarat Giants as they outclassed Telugu Titans 40- 22 in Match 48 of ongoing Pro Kabaddi League Season 8 at The Sheraton Grand, Whitefield, Bengaluru.

Rakesh scored a Super 10 (16 points) for the Giants while Parvesh Bhainswal picked up 4 tackle points. Telugu Titans' lack of a leader in defence was the major difference with raider Rajnish doing his best with a 12-point performance. The team are without a win in Season 8 and remain at the bottom of the points table.

Gujarat started without their experienced corner duo of Ravinder Pahal and Girish Ernak in the line-up. Titans, already missing the seasoned raiders Rohit Kumar and Siddharth Desai, didn't have Sandeep Kandola starting with young Muhammed Shihas taking his place. Not so surprisingly, the first half belonged to raiders with so many changes in the defence.

Gujarat's Rakesh produced the first Super Raid (3 points) of the match in the 8th minute to initiate their attempt for an ALL OUT. The Giants finally got it with 8 minutes remaining for the interval to open a 7-point lead.

Titans' Rajnish kept picking valuable raid points, but his team failed to support him in defence. Gujarat's Rakesh has been their standout performer in Season 8, and he pulled out a "dubki" close to the interval to get another 3-point Super Raid. Rakesh picked up his Super 10 as Gujarat ended the first half on top with scores 20-13.

Titans had just one successful tackle in the entire half. Rakesh and Mahendra Rajput kept getting raid points as the game was played at a slow pace after restart. Rajnish clinched his Super 10 as Titans sensed a potential comeback but Rathan K. clinched a Super Tackle and a raid point to restore parity on the mat.

Gujarat kept closing all doors to a Titans comeback with Parvesh Bhainswal also clinching a Super Tackle with a well-timed dash on Ankit Beniwal. The team from Gujarat had an 11-point lead with 5 minutes remaining and they carried that momentum to inflict another ALL OUT in the final minutes to seal their second win of the season.