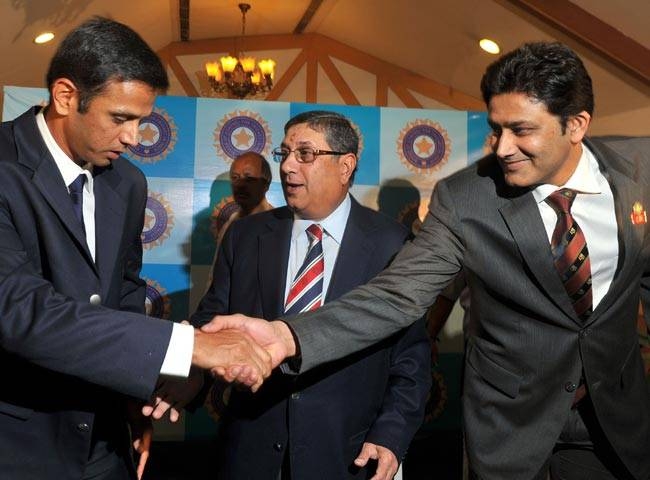 New Delhi : As the Supreme Court came down hard on the Board of Control for Cricket in India  (BCCI) chief N.Srinivasan on Thursday with its three interim proposals, the cricketing world reacted cautiously.The apex court also proposed to pass an order barring India Cements officials from getting involved with the functioning of BCCI.

Former captains Rahul Dravid, Krishnamachari Srikkanth and Anil Kumble said on the sidelines of a function in Bangalore that everybody will have to abide by the Supreme Court order but chose to remain mum over the future of Srinivasan and IPL.

“The matter is subjudice. We don’t know what is exactly happening. Till the Supreme Court comes out with its order, it is not proper to comment on the issue. The Supreme Court is supreme and everybody will have to follow what it says. There is no other way,” Srikkanth said.

“It’s subjudice and we can comment only after the Supreme Court passes its order,” Dravid said. Kumble said whatever the Supreme Court orders, the Board and everybody has to follow as law-abiding citizens. “Beyond this, I can’t comment on a matter which is subjudice. But the situation is no different for a cricketer. It’s nothing new. Whatever is happening in cricket, we can see in the society also. Of course, we need to tackle this and clean up the game.”

Former BCCI Secretary Niranjan Shah felt the rot in the BCCI has gone too far.”It’s a bad day for BCCI. Things have gone far beyond and it will only hurt cricket a lot. But I think in the interest of cleaning up the game, may be the Supreme Court’s observations are correct. Whatever the Supreme Court decides BCCI will have to abide by it,” he said. “Most of the BCCI members are in dark about what is transpiring in the last 7-8 days.

So, the BCCI should immediately, without any further delay, call Special General Body meeting and apprise all members about what has happened. And then the persons who are responsible should be taken to task.”We are in a very sorry state and BCCI must immediately take bold steps to restore the tarnished image of the Board. It is now the duty of all members to get together and find out a way to restore the credibility of the Board,” he said.  Shah said it will now be difficult to hold the IPL 7 if the Supreme Court bars CSK and RR from taking part in it.

“Now the question is different. Now there will be only six teams taking part in the IPL and it will be difficult. The BCCI should call Special General Body meeting and decide whether IPL 7 should be played or not,” said Shah.Former treasurer Ajay Shirke blamed the BCCI members for bringing the Board to such a pass.

“We have to wait for the Supreme Court’s order but this is of great sorrow. I am extremely sad to see this day dawn upon an institution which has weathered 75-odd years of ups and downs and have come up on top several times,” he said.”I think here we have a case where our president feels he is absolutely right and has done nothing wrong.

That is his perception but the perception of the media and the entire world is different”, he told Times Now. “I think the members have brought this situation upon BCCI and unless they really sit down and introspect and unless we do that it’s going to be very difficult. You have to put the interest of of the institution above everything. There is no one who really stood up to that.”

Another vice-president Rajeev Shukla said he would comment only after the Supreme Court passes its order. “We need to wait for the Supreme Court’s final order. Once the court gives its final verdict then only it will be wise to comment on this matter,” he said.

Former Indian captain Bishan Singh Bedisaid.”Heart reaches out to Aditya Verma for steadfastly taking on dictatorial Srini and coming on top! BCCI’s image touch lowest possible denominator!!” Bedi tweeted. “For no rhyme or reason Srini gving a bad name to Rhinos! Power corrupts, absolute power corrupts absolutely–BCCI has been shamed! Thanks SC save CI,” he said in another tweet.

New Delhi: Former India captain and legendary batsman Sunil Gavaskar  said Thursday he was ready to become interim president of the BCCI in India (BCCI) as proposed by the Supreme Court. “N.Srinivasan is innocent till proven guilty. I cannot pass an opinion on what Supreme Court feels as I am not a legal man. But as an opener I am ready for any challenge,” Gavaskar told NDTV.

The Supreme Court Thursday proposed that Gavaskar should take over as the interim president of the BCCI. “If the highest court is reposing this faith in me, I’ll be happy to do what they tell me to do. As an opening batsman, you must be ready for all kinds of challenges. Will do everything to the best of my abilities,” he said.”I am ready to give up my contract if I am asked to do so by the Supreme Court,” he said.

Asked about Supreme Court’s proposal to bar Super Kings and Rajasthan Royals from participating in the IPL, Gavaskar said: “Any cricket lover will feel sad if Chennai doesn’t play IPL. They have given a lot of joy to fans. Not having IPL is not going to help. When match-fixing cropped up in 1999-2000, no one said to stop Test cricket. There is no guarantee that with the strongest of measures you can stop corruption,” he said. —IANS