'Not at the level of Leo': Barcelona manager Quique Setien on Robert Lewandowski ahead of Champions League clash against Bayern Munich 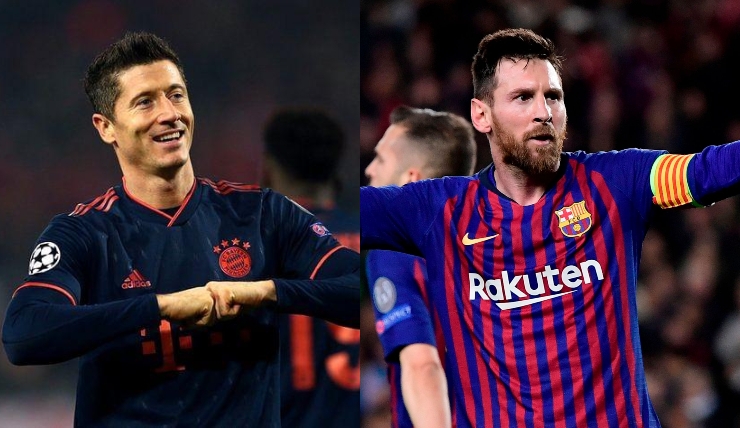 Ahead of their Champions League quarter-final clash against Bayern Munich, Barcelona coach Quique Setien compared two greats Lionel Messi and Robert Lewandowski and insisted that the latter is "not at the level of Leo".

The fixture, set to take place in Lisbon, will be a fierce encounter between the two of the greatest European clubs in football, and arguably the two greatest footballers currently - Messi and Lewandowski. The Bayern Munich forward leads the top scorer classification with 13 goals in the Champions League this season.

However, Setien told the pre-match press conference on Thursday that the Argentine is a better player.

"Lewandowski is an extraordinary and dangerous scorer. He is a great player but I think he is not at the level of Leo, as Messi is from another planet," he said.

"Lewandowski has scored 13 goals in the Champions League and he's well assisted by a lot of teammates around him. But Leo's in a great moment too as he showed it against SSC Napoli," he added.

Setien emphasised that teamwork will be a key to beat Bayern. "Messi can help you win for sure, but I've always believed in the strength of the team."

"We know the strength of the rival and I won't underestimate it. Bayern players are dangerous in attack, and they also defend well," concluded the Spaniard. In their round-of-16 fixture against Napoli, Messi stole the spotlight with his solo goal.

Soon after Clement Lenglet gave Barcelona an early lead, Messi doubled the score as he put the ball past David Ospina after a brilliant dribble through a series of defenders.

Messi beat three defenders, fell down and got back up on his feet to find the ball and curved the ball past the keeper while falling down.

Watch the goal below: