HomeSports'Nobody is looking, do it': Shahid Afridi recalls how teammate Shoaib Malik encouraged him to tamper pitch in 2005

'Nobody is looking, do it': Shahid Afridi recalls how teammate Shoaib Malik encouraged him to tamper pitch in 2005

Shahid Afridi (L) and Shoaib Malik |
Follow us on

Former Pakistan captain Shahid Afridi has finally lifted the lid on the controversial pitch tampering episode in 2005, which saw him banned from international cricket.

The incident occurred during the Faisalabad Test between Pakistan and England in 2005 which ended with Afridi getting banned for one Test and two ODIs.

Afridi recently opened up on the 17-year-old incident, recalling how a cylinder blast at the venue gave him the chance to tamper with the pitch which had nothing for the bowlers.

“That Test was in Faisalabad. The ball wasn’t turning, no seam or swing either. It got boring. You are bowling with your full strength but it’s not turning or skidding. So, there was a gas cylinder that exploded forcing everyone to turn their attention toward it. Shoaib Malik and I were talking. I said ‘Malik, I so want to create a patch for myself so at least the ball turns’. He replied, ‘Boss, go ahead. Nobody is looking.’ So I did it," Afridi said during an interview with Samaa TV.

Years later, Afridi was caught biting the ball during a T20I against England, resulting in a two-match ban. 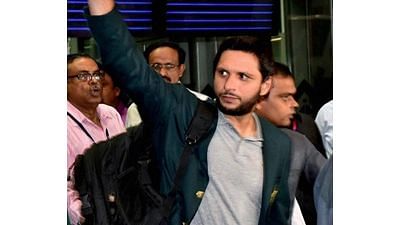