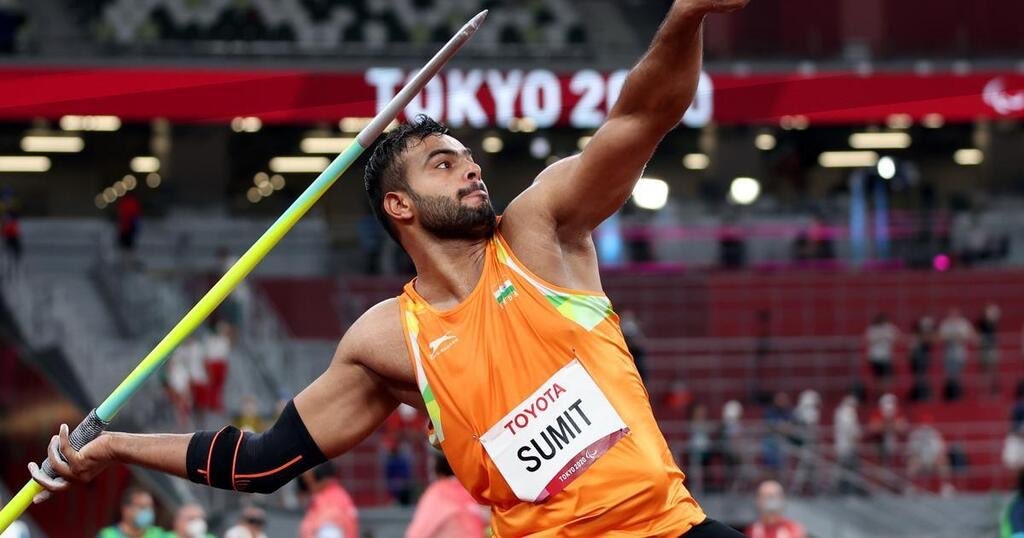 Indian para-athlete Sumit Antil, who rose to fame by smashing the World Record thrice on his way to a gold medal javelin throw in the Tokyo Paralympic Games earlier this year, has set himself a target of crossing the 80-metre mark in the next season.

Antil, who won a gold medal in men's javelin throw F64 in Tokyo Paralympics in August, taking it from 66.95m in his first attempt to 68.55m bettering his own world record (62.88m) thrice in the final, says he can hurl the spear to 85-metre mark and even beyond.

"I feel that I can touch the 80-metre mark easily. I don't know why, but I just feel that I can do it," Antil told the International Paralympic Committee's award-winning official podcast 'A Winning Mindset - Season Two' in its year end episode that was released on Thursday.

In a free-wheeling talk, Antil gave an insight into his life following the success.

"Life has completely changed and people now know who Sumit Antil is. When I reached India from Tokyo, I was given a grand welcome in my hometown," he said, talking of being feted by Prime Minister Narendra Modi, by ministers and chief ministers and receiving the Major Dhyan Chand Khel Ratna Award, the biggest honour for a sportsperson in the country.

The 24-year-old from Haryana talked about his meeting with his state-mate Neeraj Chopra, and how the Olympic champion praised him for his efforts in breaking three world records in the final.

"When I met him, he told me 'you are wonderful, you broke three world records in the same final'. But for me, what he's done is great, a great sportsperson as well. I see him (Chopra) as an inspiration because he's our national record holder, as well as the first-ever Olympic champion in athletics for India. When he won the medal in the Olympics, I got inspired by him and felt if he can win, I can too. Actually (initially) I was inspired by Devendra Jhajharia, two times Paralympic gold medalist, and one-time silver medalist," Antil said.

Antil will be participating in major events in 2022 including the World Para Athletics Championships at Kobe, Japan from August 26-September 4.

Maybe he will be able to fulfill his ambition in Japan, the country where his life changed for the better in 2021.