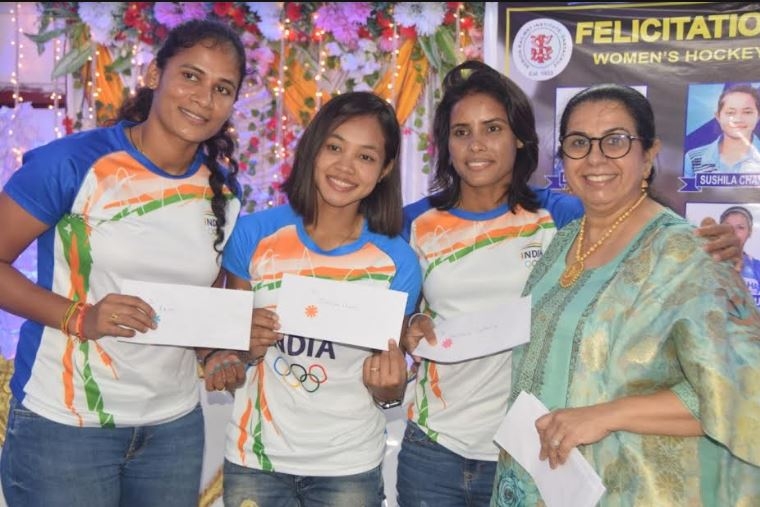 Mumbai: Members of the Indian women’s hockey team, who are employed with Central Railway and Western Railway in Mumbai, were felicitated at an event hosted by Happy Mann, former international, at the Senior Railway Institute, Santacruz, here in the city, recently.

The Indian women’s team had shown immense resilience and zeal as they finished fourth in the recently concluded Olympics in Tokyo defeating heavyweights Australia at the Olympic hockey competition and narrowly missed out on finishing on the podium. India lost to Great Britain in a nail-biting finish 3-4 in the bronze match. However, there was reason to celebrate as India’s ace forward Vandana Katariya recorded the first hat-trick by an Indian women player in the Olympics.

Katariya who scored India’s first hat trick at the Olympics complemented the Railways for backing them up by providing them with security so they could focus on the game. “The Railways have taken care of us by providing us with a job and allowing us to play for India. Many of the girls in the Indian team are employed with the Railways which speaks volumes of their contribution to Indian women’s hockey. They have organised zonal tournaments which have brought in a lot of talent,” said Katariya.

Former skipper Sushila Chanu who was facilitated at the event said, “The next target will be winning the gold in the Asian Games as that will enable us to qualify for the Paris Olympics. I feel it’s very important for us to have leagues on the lines of the Hockey India League as that will encourage the next generation of players and won’t restrict it to the 28 players at our camps. Once girls and boys are equally compensated during competitions, it will open several opportunities as many will take up the game.”

Speaking at the function, Happy Mann said, “On behalf of the former international players, we take pride in felicitating the Tokyo 2020 Olympians and thank them for making the country and Railways proud. We express our gratitude to Railways who have always been a motivating force for the hockey fraternity and all other sports. We will continue to support hockey, mentor juniors and keep the flag of the country and Railways soar high with pride.”

Olympian Selma D’Silva said, “As a team, you have shown that hard work, dedication, determination, and innumerable sacrifices have enabled you to achieve your goals at the Olympics. It also gives me an immense sense of joy that 13 of the 16 women players were from the Railways. I am confident that the women's hockey team will give their best and make the country proud at the 2024 Paris Olympics.”

This event will be held behind closed doors at the ARC grounds in Mahalaxmi Race Course, Mumbai which is the key regional qualifier round for the Junior National Equestrian Championship (JNEC).

The age groups will be, for children under-12 and under-14 and for juniors above 14 years (14-18). There will be two rounds which will be held on October and 10, and is the next qualifier round and will be held at the same venue.

This annual event was not held last year, owing to the pandemic-induced lockdown.

ARC hosts athletes from across Maharashtra who aspire to have a career in equestrian sports. These athletes train round the year to be able to qualify for the leagues and go to the nationals.

In addition to the REL, the club is likely to host the Junior National Equestrian Championship (JNEC), Federation Equestre Internationale (FEI) Show Jumping, The Asian Games Trials 2021 which will be held in three phases apart from the upcoming polo season and matches.

With so many events and opportunities for the sportsmen coming up, ARC is hoping these events will be open to the audience and help the club raise revenue and sponsorships towards the maintenance of the club and horses.

The Mumbai Hockey Association Ltd (MHAL) will be conducting two-day trials to select junior boy’s from Mumbai, who will be shortlisted to attend the final selection trials to select the Hockey Maharashtra team to participate in the Hockey India Junior National Hockey Championship, to be held in Telengana in October.

The Mumbai leg of the trials will be held on September 13 and 14, at MHAL ground, Churchgate from 4 pm onwards. Players born on or after 01/01/2002 and who are vaccinated and registered with Hockey India are eligible to attend the selection trials, according to a MHAL media release.

The five selected players from Mumbai will have to attend the final selection trials to be conducted at the Shree Shiv Chhatrapati Sports Complex, Balewadi, Pune on September 15.