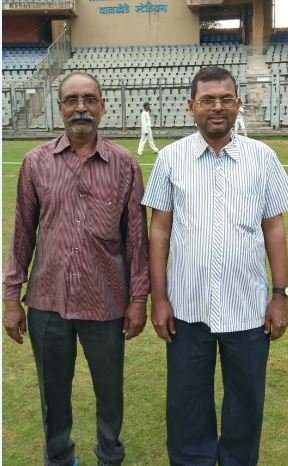 Shankar (L) along with his assistant Vinayak | File Picture

Giles and Harris Shields are inter-school cricket tournaments, which have been held in Mumbai since 1897. Giles for kids under 14 years of age, while Harris is for boys who are under 16 years.

These two tournaments are known for many records. Promising players from these platforms have later played for the Mumbai Ranji team and then gone on to don the Indian cap. Incidentally, Mumbai has won the Ranji Trophy over 41 times and finished runner-up five times.

To trudge history, the Harris Shield is named after Lord Harris, former England captain and governor of Bombay, and the tournament is perhaps best known for the 664-run partnership in 1988 that brought Sachin Tendulkar and Vinod Kambli into the limelight.

But let's not forget those whose contributions to the game are much more: groundsmen, maalis or chachas as they are fondly called by the children. The groundsmen who religiously and tirelessly work to make the best 22-yard for the kids to enjoy the game. They are the people behind the iron curtain; they are the people who never ever think of name and fame.

If we ask any of these players who have donned the Indian colours to recollect the best moments during their younger days, most of them will talk about their first coach and conveniently forget the man who made the wickets for them to play this game.

Groundsmen or maalis play a major role in the making of these big cricketers, but they are always the forgotten heroes. When one of them recently passed away, very few came to know about it. Shankar chacha had made wickets in Azad Maidan, Oval Maidan, Shivaji Park and even Wankhede stadium. He passed away in his hometown Azamgarh in Uttar Pradesh last month due to prolonged illness. He was 76 years old.

Shankar has been with Al Baarkar School ground, in Kurla for the past ten years. “Yes, he has been the curator of the ground, and for him it is like his child. He waters, trims the grass and maintains is well,” said the school coach, Nafees Khan, a motorman with the Central Railways.

"He was not a maali, but a coach, and a father figure," says Afzal Khan, a student from one of the renowned schools in Mumbai. "Sometimes when our parents fail to pick us up, Shankar chacha will always be there. Once I was waiting for my parents to come and pick me up. I live in Andheri and it was getting late; I sat down and cried, but Shankar chacha came to my help. He took me to CSMT and accompanied me till Andheri station from where he called my father to pick me up," said Afzal.

Like Afzal, many remember Shankar; but ironically, maalis or chachas are not recognised beyond the grounds.