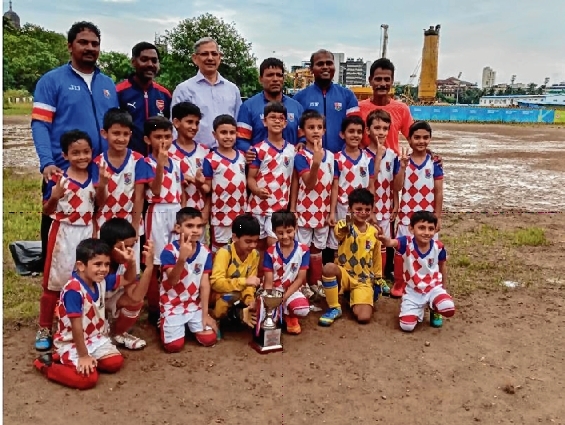 Mumbai: Campion School, Cooperage Road stamped their authority on the Mumbai Schools Sports Association (MSSA) under-8 inter-school with a thumping 5-0 win over Bombay Scottish Mahim in the final played at the Azad Maidan, here on Wednesday.

Earlier, Stanislaus emerged as the winners of the hardliner cup (Third Place) posting a 2-0 win over Cathedral & John Connon. Campion’s custodian Eran Muffadil stood between the Bombay Scottish and the goal. He not only was rock solid under the bar, but even averted a penalty during the game.

It was Ishaan Lehri who hogged the limelight striking thrice for the winners. One of the tallest among the players (3’8 inches) scored a brace while Priaan Kantawala chipped in one as the Campions took the breather with a 3-0 cushion.

Bombay Scottish could have made a comeback soon after the change of ends, but the alert Campions’ custodian Muffadil averted any danger to their goal grabbing the ball taken from the dreaded spot. It was Armaan Agarwal who failed to beat the keeper.

Campion striker who was lurking upfront, finally found his name in the list of scorers when he found the net in the 24nd minute of play, and Ishaan Lehry nailed the final nail on the Bombay Scottish coffin and his three goals in-a-row with just five minutes to go before the final whistle.

Playing just for a win, the toddlers who were below the age of seven years, were best in their own way. Running after the ball and kicking at the earliest was the modus operandi which were a treat to watch.

The 30-odd minutes encounter not just saw the boys fighting out in the middle, the parents who out numbers the players were equally involved in the game.

‘Shoot, Clear, Oh No’ were frequently heard from the parents who were on the sidelines of the match.