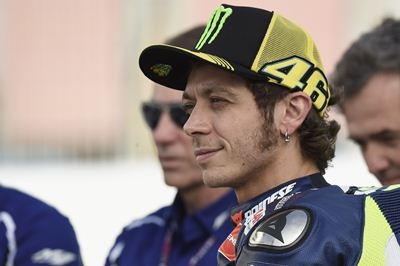 The duo were the quickest on the track and were a class apart leaving the rest which included Rossi’s Yamaha teammate and title rival Jorge Lorenzo well behind, reports autosport.com.

The Italian led for the major part of the race but was continuously put under the pump by Marquez’s Honda. Marquez calmly stalked his rival until slipping ahead into the first corner with seven laps to go.

Rossi managed to squeeze his way back into the lead with only two laps remaining and resisted 22-year-old Marquez’s challenge at the next corner. Rossi then stretched a 0.6-second advantage – his biggest of the ultra-close race – only for Marquez to come back at him with a storming final lap.

Into the chicane for the last time, the Spaniard flung his Honda to the inside of Rossi’s Yamaha. The duo made contact, with Rossi shooting across the gravel and front wheel briefly in air but somehow managed to still stay ahead.

With Marquez losing a little momentum, Rossi crossed the line 1.2 seconds clear to secure his third win of 2015 and his first since the Termas de Rio Hondo race in April.