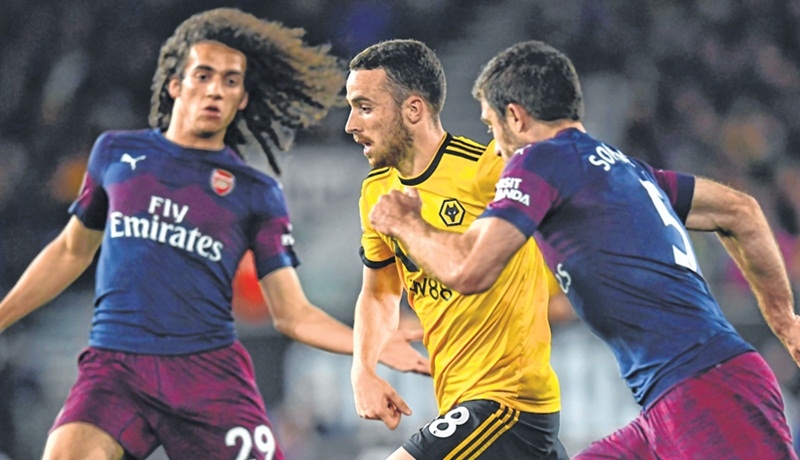 Wolverhampton: Arsenal lost ground in the race for a top-four place after suffering a 3-1 defeat by Wolverhampton Wanderers at Molineux Stadium. Wolves took the lead on 28 minutes when Ruben Neves fired a superb free-kick past Bernd Leno. Matt Doherty headed in a second nine minutes later before Diogo Jota made it 3-0 in first-half stoppage time after racing through the Arsenal defence. Sokratis pulled a goal back for the visitors with a header from Granit Xhaka’s cross with 10 minutes remaining.

But their second defeat in four days means Unai Emery’s side remain in fifth with 66 points, a point and a place behind Chelsea. Wolves’ first victory in three PL matches lifts them to seventh with 51 points. The Arsenal manager admitted his team were outplayed by Wolves, who scored three goals in the first half to give the visitors a mountain to climb. Despite the chastening defeat the Spaniard said his side will keep striving for Champions League football, which they can achieve either through a top-four finish in the Premier League or by winning the Europa League.

Defeat in the Midlands left Emery’s men a point behind fourth-placed Chelsea. “I usually am very critical with myself and I am angry with myself that we didn’t do the gameplan we wanted, not with the players,” said Emery when asked if he was angry with his team. “First I am thinking about the solution and the solution for me is to take the possibility on Sunday at Leicester and get our best performance and the best possibility to take the three points.”