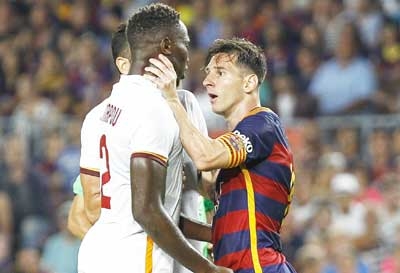 Barcelona :  FC Barcelona skipper Lionel Messi was involved in a fiery altercation with AS Roma defender Mapou Yanga-M’Biwa as Barcelona won 3-0 in their Gamper Trophy clash here. Despite it being a pre-season friendly, the pair got into a heated exchange during the first-half at the Nou Camp stadium on Wednesday after Yanga-M’Biwa leaned his head in towards Messi.

The Argentine star retaliated by thrusting his own head at the Frenchman before making to grab his throat, reports skysports.com on Thursday. Messi was lucky not to receive a red card, as both could easily have been sent off, but the referee decided to show leniency and only book the pair of them.

Neymar had earlier given Barcelona the lead, while Messi doubled it just before half-time. Ivan Rakitic then added a third midway through the second half to secure a comfortable victory.

Brazil star Neymar and Argentina’s Messi had both returned late to training following their Copa America campaigns, but looked in impressive form ahead of Barcelona’s European Super Cup tie with Sevilla next Tuesday.

The chemistry that saw them, along with Luis Suarez, hit 122 goals in Barcelona’s treble success last season was evident from the start. Following the clash with Sevilla, Barcelona play Athletic Bilbao home and away in the Spanish Super Cup before they meet Bilbao in their first La Liga game on August 23.