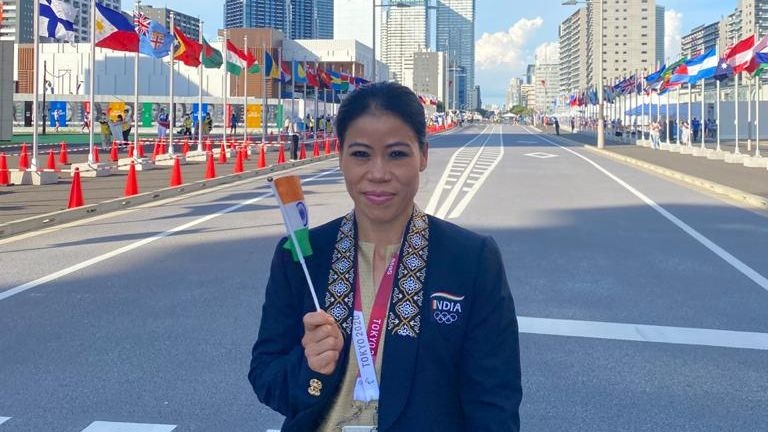 Tokyo, July 23: Six-time AIBA World Champion MC Mary Kom took to social media to share the glimpe of what Japan's capital city of Tokyo looks like before the opening ceremony scheduled to start on Friday at 4.30 pm (IST).

Holding India's flag, she shared pictures of her along with Manpreet Singh.

Meanwhile, twenty-five members from the Indian contingent will attend the opening ceremony of the Tokyo 2020 Olympics scheduled to be held at the National Stadium.

Ankita Raina has been added to the list of players who will attend the event on Friday evening while Manika Batra and Sharath Kamal from the Table Tennis team will not attend the ceremony, IOA Secretary General Rajeev Mehta confirmed on Twitter. Amit, Ashish Kumar, Mary Kom are among the eight boxers who will be present at the function along with six Indian officials.

"Change in athletes list -- Sharat Kamal and Manika Batra of Table Tennis are canceled and Ankita from Tennis is added," Rajeev Mehta tweeted with an updated list of players and officials who are set to represent India in the ceremony.

Meanwhile, Indian hockey team skipper Manpreet Singh will also be there along with the above-mentioned athletes as he is the flag bearer along with Mary Kom.

Archers, shooters, shuttlers, and hockey players (except Manpreet) among others from the Indian contingent will not be attending the Tokyo 2020 Olympics opening ceremony.

Notably, all those who have been asked to skip the opening ceremony have their respective events the following day. In the ceremony, India is at serial number 21 in the march past. The sequence of march past is as per the Japanese alphabet and only six officials can participate from each participating nation.

A total of 127 athletes across 18 sports disciplines from India are participating in Olympics. This is the biggest-ever contingent India has sent to any Olympics. The 69 cumulative events across the 18 sport disciplines that India will participate in are also the highest ever for the country.