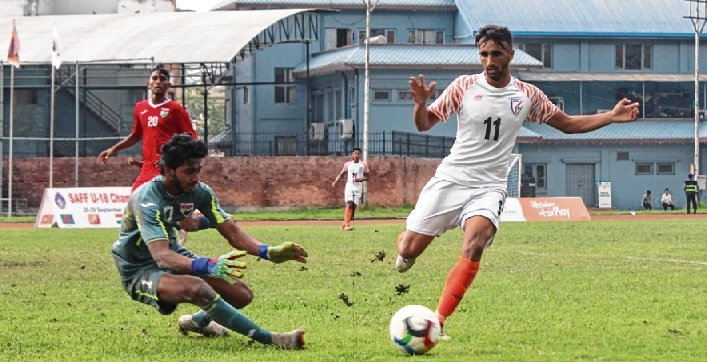 Kathmandu: India booked their spot in the final of SAFF U-18 Championship 2019 with a comprehensive 4-0 win over Maldives in Kathmandu, Nepal, on Friday.

With Narender Gahlot (7'), Manvir Singh (79') and Ninthoinganba Meetei (81') scored three for India, Maldives’ Ahnaf Rasheedh (45'+1') scored an own goal on the stroke of half time, to make it an emphatic victory for India.

India looked to attack from the get-go, and reaped the reward early on, when centre-back Narender Gahlot, who had impressed for the senior team in the Hero Intercontinental Cup, rose above the rest of the pack and glided his header past a flailing keeper.

The Indians created a flurry of chances, and Givson had the opportunity to make it two when he headed a cross from the left towards the top corner. However, an outstretched hand by Maldives keeper Hassan Aleef kept it out.

Around the half-hour mark, Ninthoi worked a short corner and crossed it in, but Jeakson Singh’s shot on the volley whistled inches wide. Ninthoi looked lively on the right flank, bombing up and down, to create a lot of problems for the Maldives defenders. He linked up well with full-back Thoiba Singh.

Maldives started to create a few chances towards the end of the first half, when Ahmed Husaam made his way into the Indian box and earned a corner. The Islanders also worked a short corner, as captain Hassan Nazeem jinked past a defender, entered the box, and seemingly went down under some pressure. However, the referee was having none of it and waved play on.

India gaffer Floyd Pinto brought on some defensive reinforcement in the second half, as Akash Mishra came on for Aman Chetri, pushing Ravi Bahadur Rana to the left-wing. Mishra soon had a chance from a set-piece, but his effort was gathered by the Maldives keeper.

It took Ravi Bahadur some time to get going as a left-winger, but he came into his own after the hour mark, making off-the-ball darts runs into the middle. Jeakson managed to find him on one of these occasions and set him through on goal. however, the eventual shot was punched away.

Maldives had an opportunity to pull one goal back with less than 20 minutes remaining on the clock, when some pressing by their forwards resulted in Ahmed Samaah gaining possession of the ball inside the Indian penalty box. However, the Indian defence was on his case in an instant, and the danger was averted by captain Jitendra Singh.

Second-half substitute Manvir Singh made it three with a little over 10 minutes to go in the second half, as he got on to the ball after it was spilt by the Maldives keeper inside the box, and turned it in.

Soon after, it was right-winger Ninthoi, who beautifully leathered a volley from outside the Maldives area into the back of the net, making it a four-goal lead for India, who now make their way to the final of the SAFF U-18 Championship 2019, where they are set to face-off against old foes Bangladesh.