Liverpool will improve next season: Klopp 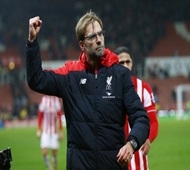 Liverpool: The current season has not been too exciting for Liverpool fans, but manager Juergen Klopp is confident that the team will see a major improvement next season. Liverpool have struggled in mid-table mediocrity for most of the season and have no chances of finishing in the top four. Their chances of qualifying for the Champions League are almost nil, but the Merseyside club can still finish in the top six and ensure qualification for next season’s Europa Cup.

“We can get sixth position. It isn’t the biggest success in the history of Liverpool but everyone interested in Liverpool can see the good signs and we will build on it. We have to improve and I am sure we will. A lot of things need to be perfect for a really good season,” Klopp was quoted as saying by the Guardian on Tuesday.

“I’m really looking forward to next season, to pre-season, but this season we are still looking for what we can get,” he added.

Liverpool can still end their season on a high note by defeating Sevilla in the Europa League final and secure Champions League qualification with it, but Klopp will not allow any letup in the remaining English Premier League (EPL) matches.  “If we lose the next two games, believe me I will go to Basel confident but it would feel better if we have won these two games. Sevilla changed 11 positions in the last game and all you read is that Sevilla is not ready for the final. They are already preparing for the final,” Klopp said.

“We can’t do this. We are not in a fixed position in the table like they are. That is their way but our way is to be focused on Chelsea and West Brom and to try to get sixth before the final. We will try everything for sure,” the German added.