Liverpool have eight-point advantage over Leicester City and Chelsea

Two goals in the first 13 minutes from Fabinho and Mohamed Salah gave the European champions a dream start before Sadio Mane's diving header early in the second half sealed City's fate.
Agencies 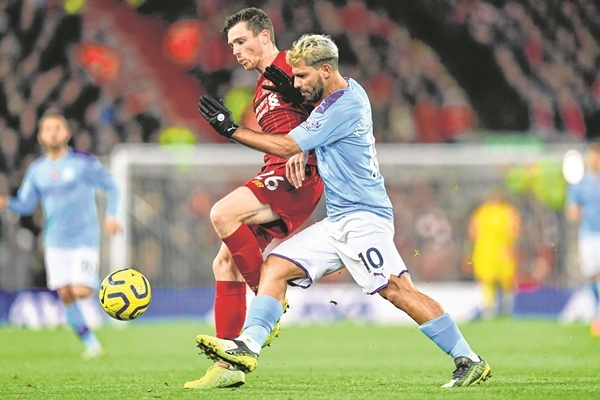 Liverpool: Liverpool took a huge step towards a first Premier League title in 30 years by beating defending champions Manchester City 3-1 at Anfield on Sunday to open up an eight-point lead at the top of the table.

Two goals in the first 13 minutes from Fabinho and Mohamed Salah gave the European champions a dream start before Sadio Mane's diving header early in the second half sealed City's fate.

Bernardo Silva pulled a late goal back but a third defeat in eight league games leaves City down in fourth, nine points behind Liverpool, and with a mountain to climb if they are to claim a third straight league title.

Liverpool have a nine-point lead over City, an eight-point advantage over Leicester City and Chelsea and although it sounds dramatic to say so it already feels - with 26 games to go - that it may have to take something catastrophic for them not to triumph from here.

City's defensive deficiencies have been much publicised without the injured Aymeric Laporte so far this season and they crumbled as Liverpool scored with their first two attacks of the game.

But the visitors were furious with some justification at the move that led to the opening goal when a dangerous foray into the Liverpool box ended with the ball striking Trent Alexander-Arnold on the arm.

Instead of City being awarded a penalty, the hosts broke down the other end and the ball fell to Fabinho on the edge of the area.

The Brazilian is not renowned for his goalscoring, but when invited to shoot by a hesitant City back line five minutes in, he arrowed a strike beyond stand-in goalkeeper Claudio Bravo.

The visitors had their chances to get level in between Liverpool's early blitz as Raheem Sterling headed wide Kevin De Bruyne's in-swinging free-kick.

But it was Liverpool who were ruthless as a pinpoint cross by Andy Robertson was headed home on the bounce by Salah. City still went on to enjoy the better of the play in the remainder of the first half, but the damage was already done.

Sergio Aguero was denied his first ever goal at Anfield by a smart save from Alisson Becker before a purposeful burst forward by Angelino saw his deflected shot come back off the post.

Aguero then dragged City's best chance of a reply before the break wide after great work by De Bruyne.

Any hope of a City comeback was eliminated six minutes into the second half when Jordan Henderson's teasing cross was met with a diving header by Mane although Bravo could have done better to stop the ball creeping over the line.

Liverpool agonisingly missed out on the title by a solitary point last season as City ended the season on a 14-match winning run to edge a titanic tussle.

Pep Guardiola's men will need to produce something similarly spectacular to retain the title, but after quickly making up for the disappointment of the title race by wining the Champions League last season, Liverpool look destined to go one better this time round.

Guardiola's mood was not improved when another VAR check went against his side after Sterling went down in the area under pressure from Mane.

City finally got the goal much of their approach play had threatened when Bernardo Silva swept home Angelino's cross 12 minutes from time.

Liverpool were then camped inside their own half, but held out for what could prove to be a vital win come May.