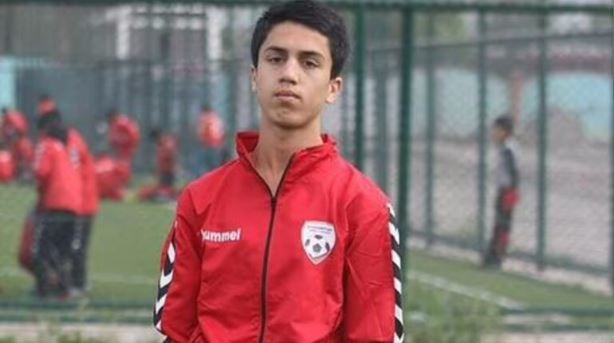 The person to fall from USAF Boeing C-17 plane was Zaki Anwari, an Afghan national team footballer. The 19-year-old died in a fall from a US plane at Kabul airport on Monday, the Afghan news agency Ariana said on Thursday.

Ariana said Zaki Anwari fell from a USAF Boeing C-17 and that the death had been confirmed by the General Directorate for Sport.

Anwari was one of thousands of Afghans who flocked to the Hamid Karzai International Airport on Monday, the day after the Taliban captured the Afghan capital, hoping to get on a plane out of the country. He reportedly climbed onto a C-17 plane that was about to depart from Kabul.

Zaki Anwari’s remains were said to have been found aboard the US Air Force C-17 transport plane after the aircraft dashed to escape the advancing Taliban while carrying hundreds of refugees.

Educated young women, former U.S. military translators and other Afghans most at-risk from the Taliban appealed to the Biden administration to get them on evacuation flights as the United States struggled to bring order to the continuing chaos at the Kabul airport.

President Joe Biden and his top officials said the U.S. was working to speed up the evacuation, but made no promises how long it would last or how many desperate people it would fly to safety.

"We don't have the capability to go out and collect large numbers of people," Defense Secretary Lloyd Austin told reporters Wednesday, adding that evacuations would continue "until the clock runs out or we run out of capability." Afghans in danger because of their work with the U.S. military or U.S organizations, and Americans scrambling to get them out, also pleaded with Washington to cut the red tape that they say could strand thousands of vulnerable Afghans if U.S. forces withdraw as planned in the coming days.

"If we don't sort this out, we'll literally be condemning people to death," said Marina Kielpinski LeGree, the American head of a nonprofit, Ascend. The organization's young Afghan female colleagues were in the mass of people waiting for flights at the airport in the wake of days of mayhem, tear gas and gunshots.

At the Kabul airport, military evacuation flights continued. However, access to the airport remained difficult. On Thursday, Taliban militants fired into the air to try to control the crowds gathered at the airport's blast walls. Men, women and children fled. Fighter jets later roared overhead, but no airstrike accompanied their pass.

Russia offered to provide its aircraft to fly Afghans willing to leave the country to any nations willing to host them. Some U.S. NATO partners, including Italy, have been flying Afghans out of the country in relatively small numbers.

The U.S. has rushed in troops, transport planes and commanders to secure the airport, seek Taliban guarantees of safe passage, and ramp up an airlift capable of ferrying between 5,000 and 9,000 people a day.

One of the last windows of escape from the Taliban threatens to close when Biden's planned pullout by Aug. 31 is complete.

"People are going to die," said Air Force veteran Sam Lerman. He said he was working to help a former Afghan military contractor who received an email from the State Department telling him to go to the airport. But U.S. troops at the entry to the airport turned back the Afghan man Wednesday, telling him he lacked the right document, Lerman said.

Deputy Secretary of State Wendy Sherman described an all-out effort by U.S. officials to get Afghans and allies to safety. "This is an all-hands-on-deck effort and we're aren't going to let up," Sherman said at a State Department news conference.

Taliban fighters and checkpoints ringed the airport - barriers for Afghans who fear that their past work with Westerners makes them prime targets of the insurgents. Afghans who made it past the Taliban reached Americans guarding the airport complex, and thrust documents at some of the 4,500 U.S. troops in temporary control.

Hundreds of Afghans who lacked any papers or promises of flights also congregated at the airport, adding to the chaos. It didn't help that many of the Taliban fighters were illiterate, and cannot read the documents.

Nearly 6,000 people had been evacuated by the U.S. military since Saturday, a White House official said Wednesday night. The turmoil has seen Afghans rush the tarmac. In one instance, some apparently fell to their death while clinging to a departing American C-17 transport plane.

Hoping to secure seats on an airlift are American citizens and other foreigners, Afghan allies of the Western forces, and women, journalists, activists and others most at risk from the fundamentalist Taliban.

The U.S. has declined to give estimates of how many U.S. citizens remain in Afghanistan and are in need of escape.

About 100,000 Afghans were seeking evacuation through a U.S. visa program meant to provide refuge to Afghans who had worked with Americans, as well as family members, said Rebecca Heller, head of the U.S.-based International Refugee Assistance Program. Her organization was among those pressing the United States to urgently step up visa processing.

Heller said an Afghan client told her of five Afghan translators killed by the Taliban in the past two days for their past work with Americans.

Heller played an appeal that she said a female Afghan client had recorded. The woman, whose name The Associated Press is withholding for her safety, has been waiting for three years for U.S. action on her visa application.

"The only hope in this moment I have is the U.S. government," the Afghan woman said. "Please, U.S. government ... please stop promising. Please, start taking action. As immediately as you can." The Pentagon said senior U.S. military officers, including Navy Rear Adm. Peter Vasely, are talking to Taliban commanders about Taliban checkpoints and curfews that have limited the number of Americans and Afghans able to enter the airport.

The U.S. government sent emails in recent days telling some American citizens, green card holders and their families, and others to come to the airport, and to be prepared to wait.

Biden has defended his decision to end the U.S. combat mission in Afghanistan that began after the attacks of Sept. 11, 2001, and has rejected blame for the chaos that has ensued. Biden this laid responsibility on Afghans themselves for the Taliban takeover and for the frantic scrambles to flee the country.

An operation to fly to the United States former Afghan translators and others whose visa processes were closest to completion had managed to bring in only about half of the 4,000 Afghans predicted before the Taliban takeover.

A separate visa programme meant to fly out civil society members most at risk from the Taliban was handicapped from the start, partly by a U.S. requirement that Afghans travel outside Afghanistan to apply - a trip that the Taliban sweep made impossible for most.