Rodriguez was fouled, but was booked for dissent. The Colombian sarcastically applauded the official, ripped his shirt off and ran away
FPJ Web Desk 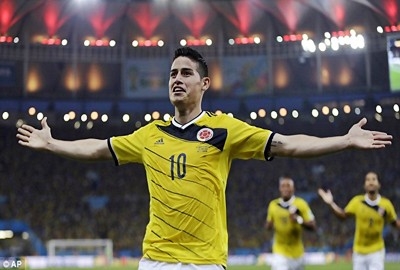 Colombian 2014 World Cup star James Rodriguez was bizarrely sent off via two quickfire yellow cards for dissent for shouting at the referee in his new Qatari club Al Rayyan's loss on Saturday.

The former Everton man, who was let go by the Toffees earlier this year, was trying to get his side an equaliser while Al Rayyan were 2-1 down away to Al-Arabi, when he was scythed down by opposition player Aaron Boupendza on the edge of the box.

A number of Al-Rayyan players were furious at the challenge, and a melee ensued between both teams while James remained on the floor clutching his leg.

The midfielder eventually got up in preparation to take the free kick, only for the referee to run over and show him a yellow card, which prompted an angry reaction. Rodriguez had already done enough to earn himself a second booking and therefore a red, but there was more drama to follow.

He reacted with more fury and sarcastically applauded the referee for giving him the red card. He then took his shirt off as he was sprinting down the tunnel towards the dressing room.