ISL to kick off in October 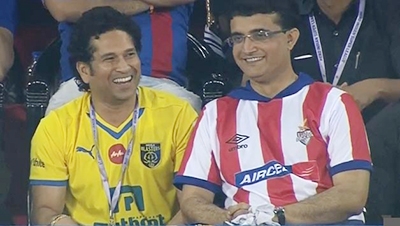 New Delhi : Defending champions Atletico de Kolkata (ATK) will take on hosts Chennaiyin FC in the opening match of the second edition of Hero Indian Super League football tournament, which is scheduled to start on October 3.

There will be 61 matches in all on a home-and-away basis with double-legged semi-finals starting December 11 and the final on December 20. All the matches will be played at 7 pm (IST).

Chennai will also host the opening ceremony of the cash-rich league. The action will then move to Goa on the very next day with FC Goa pitted against Delhi Dynamos FC, while the following day will feature ‘Maharashtra Derby’ on October 5 when Mumbai City FC locks horns with FC Pune City at DY Patil Stadium, Navi Mumbai.

The inaugural year of Hero Indian Super League witnessed an unprecedented response in the history of Indian football, achieving a rare feat of being the fourth most watched football League in the world.

ISL’s first edition saw participation of footballers from 36 varied nationalities, including India; changing the way football was perceived in the country so far. The globally viewed tournament had a whopping 129 goals scored at an average of 2.11 goals per game.

The Indian Super League brought Indian football to the world stage with its high quality football. Over 1.5 million fans made their way to eight city based club’s home stadiums to witness this unrivalled footballing event unfold.

The inaugural season of Hero ISL was watched by 429 million viewers on TV in India, more than 2.5 times of the viewership of 2014 FIFA World Cup!

The social media presence of Hero ISL has grown exponentially since the inaugural season with over 1.7 million ‘Likes’ on the League’s official Facebook page in addition to another 120 thousands that follow @IndSuperLeague on Twitter.

The ISL website www.indiansuperleague.com received 3.4 million unique visitors and over 28 million page views over the duration of the League with a record of 32 million online views on www.starsports.com, making it the largest football event ever on digital in India. PTI

Indian players will be released 4 days prior WC

New Delhi: The national team footballers, who will be contracted with various Indian Super League franchises will be released four days prior to the three World Cup qualifying round matches which are overlapping with the cash-rich league that will be held from October 3-December 20.

Meanwhile, around 12 India players, who missed out playing ISL last time will be included in the auction which will be held in Mumbai on July 6. Notable names that will feature in this year’s auction will include star striker and India captain Sunil Chhetri along with another international Robin Singh.

India are scheduled to play back-to-back away games against Turkmenistan and Oman on October 8 and 13 and a home match against Guam on November 13.