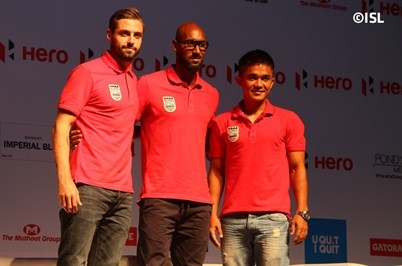 Mumbai City FC, for the upcoming second season of the Indian Super League (ISL), have handed the reins to former French international Nicolas Anelka. Anelka, who will be part of the Mumbai-based franchisee for the second consecutive season, will don the dual role of marquee player cum-manager for his team. The 36-year-old, who replaced Peter Reid as the manager, will lead his team in the eight-team competition, which will be played from October 3rd to December 20th.

The main challenge for the former Premier League star will be to lead his team to a better finish than last year, when Mumbai City FC ended up second from the bottom — managing only four wins from 14 matches.

One of the major challenge ahead of Anelka, this season, will be to help his team find the net more frequently, after they scored mere 12 goals in whole duration of the tournament last season –conceding as much as 21 times in total.

Anelka feels the team is better placed compared to the last season with more options in the attack.

Mumbai open their ISL campaign against state rivals Pune City FC on October 5th at the Balewadi Stadium in Pune, and the former Real Madrid and Arsenal star sounded confident about his dual role.

“I pleased to have more leaders in the squad. Andre (Moritz) can lead on the pitch when I am on the side-line. Sunil (Chhetri) is the captain of the Indian team, and so, he too can play a leadership role. It makes my job easier,” he added.

Anelka, who scored two goals and made two assists during his stint in the first edition, will have more on hand than just shouting out instructions from the side-line. With Chhetri, who will be playing his first season of the ISL after being brought for a huge price of Rs 1.2 crores is set to miss couple of opening games due to India’s World Cup qualifiers match against Turkmenistan on October 8 and Anelka might have to don the jersey and take to the field.

With the experience of playing over 600 matches and scoring over 200 goals in his professional career, Anelka can still be dangerous in the opponents half. Anelka can take heart from the fact that he has a bunch of talented players with a proven record at his disposal.

The team boasts of good mix of Indian and foreign players as well the presence of half a dozen Indian players will make the manager’s job difficult when it comes to finalising the playing XI. Mumbai have an impressive list of defenders, which consist of four foreigners. Frantz Bertin, Darren O’ Dea, Kingshuk Debnath and Rowilson Rodrigues will be the contenders for the centre-back spot.

Ashutosh Mehta and Spaniard Aitor Lopez will be the options for the right-back position. Indian Lalchhuan Mawia and Keegan Pereira fill up the left-back slot.

Behind the defence, Mumbai have a safe hand in India’s top goalkeeper Subrata Paul. Bagan’s Debjit Majumdar and Albino Gomes will be the reserve goalkeepers. Moritz, who scored the first hat-trick in ISL, alongwith Cristian Bustos, Juan Aguilera and Tunisian Selim Benachour will form the midfield.

Mohan Bagan star Sony Norde, Lalrindika Ralte and Gabriel Fernandez will be the Indian players in the midfield. Other options for Mumbai in the midfield are Brandon Fernandes, former Indian international Sampath Kuttymani and Pratesh Shirodkar.

Up front alongside Chhetri, Anelka might play Frenchman Frederic Piquionne and Subash Singh.

Mumbai will play their home game at the 55000-seater D.Y. Patil Stadium in Navi Mumbai.