Is Virat Kohli planning to give up limited overs captaincy after T20 World Cup? Here is all you need to know

The dashing Indian skipper is mulling over this decision as he wants to focus on his batting form which has not been up to the mark over the last year, as per a news a news report in TOI.
FPJ Web Desk 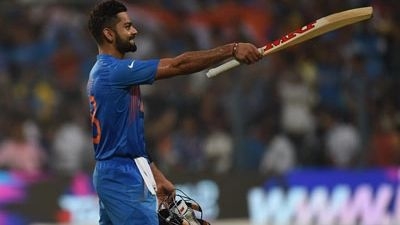 Indian skipper Virat Kohli is planning to take a decision on the future of his role as the leader of the side since he wants to focus on his batting form which has considerably detoriating over the last year, as per a media report.

Team India white ball side could be seeing undergoing a leadership change at the top after the T20 World Cup next month with Captain Virat Kohli set to take the call soon. If he decides to give up captaincy, then Indian Opener and Mumbai Indians captain Rohit Sharma could be seen taking over the charge in ODI and T20 cricket.

The dashing Indian skipper is mulling over this decision as he wants to focus on his batting form which has not been up to the mark over the last year, as per a news a news report in TOI.

The rumours of Rohit taking over the reins have been long going rounds, at least in T20Is, taking into consideration his massive IPL success where he has led the Mumbai Indians to five title victories which inturn solidifies his candidature.

“Virat himself will make the announcement. He is of the view that he needs to concentrate on his batting and go back to becoming what he’s always been — the best batsman in the world,” TOI quoted BCCI sources as saying.

Kohli till date has led India in 95 ODIs and with 65 wins along with 27 losses, he enjoys a great winning percentage of 70.43.

In the T20s, Kohli has led the Indian side on 45 outings so far, recording victories on 27 occasions while losing 14 times.

But BCCI treasurer Arun Dhumal on Monday rubbished reports suggesting that Kohli is likely to step down as skipper of the limited-overs format.

The BCCI has roped in former India captain MS Dhoni as the mentor of Team India for the upcoming T20 World Cup. The development is being perceived by many as 'Kohli’s inability to win an ICC trophy' citing his unsucess in the tournaments.

On the other hand Rohit Sharma has led India in 10 ODIs out of which eight ended in a win while only two resulting in loss. In T20Is, he has captained the men in blue 19 times and led them to victory on 15 outings and lost only four.

It is also believed that Team India head coach Ravi Shastri will also end his term with the team after the T20 World Cup.