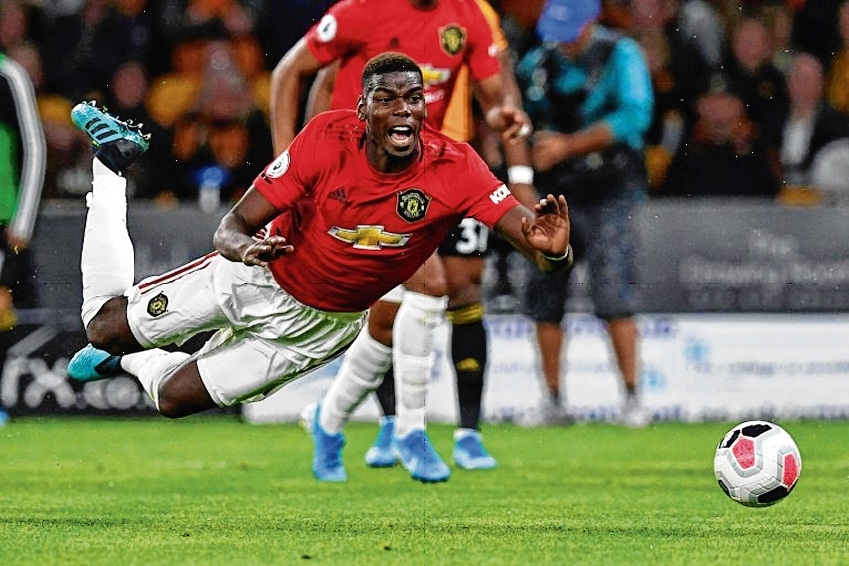 With Pogba, Shaw, Martial, Dalot and Bailly missing today’s clash, and Lingard along with Bissaka doubtful, Ole Gunnar Solskjaer will potentially miss 7 of his first-team players |

Pogba twisted his ankle in the 1-1 draw at Southampton two weeks ago and did not play for France in their two matches during the international break, with the midfielder expected to return for the match at West Ham on 22 September. Shaw (hamstring) and Martial (thigh) have still not recovered from the injuries sustained in the 2-1 defeat to Crystal Palace on 24 August, while Dalot (hip) and Bailly (knee) are longer-term injuries.

“The treatment room has been busy and it still is,” said Solskjaer. “We don’t really know who is going to be available. “Maybe Aaron and Jesse will make it but that is it from the ones that pulled out. “Paul will not be fit, not unless he has a miraculous recovery. He has not been ready to do training at 100%.” United are looking for their first win since the opening day of the season with draws at Wolves and Southampton either side of the Palace defeat leaving them down in eighth, three points adrift of Leicester in third.

Under former Liverpool manager Brendan Rodgers, Leicester are aiming to return to the top six at the expense of the likes of United, Chelsea, Arsenal or Tottenham, three years on from their remarkable Premier League title triumph. “Leicester is always a tough game. They are a club that want to push into the top four, they have good players and a proven top manager,” added Solskjaer.

“Brendan’s teams always play good football, so we have to play well to get the three points.” Leicester’s visit will mean an early reunion with his old club for Harry Maguire, who swapped the Foxes for Old Trafford this summer in an £80 million transfer that made him the world’s most expensive defender.

And despite mixed results, Solskjaer is delighted with what Maguire has brought to the club in his first month at United. “Harry has been brilliant for us,” said the Norwegian. “He has come into the dressing room and been a leader there and a leader on the pitch. He is going to be a big part of the future of this club. We watched him enough to know he is the guy we wanted.

“Leicester did not want to lose him and that is why we spent the money we did on him.” Solskjaer also believes Maguire has the traits that mark him out as a potential future captain of United. “He is definitely a character and personality that can be captain of a big club. He is a leader in the dressing room, both in his performances, his stature and his behaviour. “Harry is a character you would like to follow. Some are technical leaders, some are leaders by voice, but he has got the lot.”

Guardiola fears Laporte out for up to six months

Manchester City manager Pep Guardiola has confirmed that influential defender Aymeric Laporte faces up to six months out after undergoing knee surgery. Laporte damaged cartilage and the lateral meniscus in his right knee after a clash with Brighton's Adam Webster in City's 4-0 win on August 31. City reported that Laporte had undergone successful surgery in Barcelona, but did not specify how long they expected the Frenchman to be sidelined.

Guardiola confirmed the Frenchman will not return before next year and could even miss the start to the knockout stages of the Champions League in February, should the English champions advance to the last 16. "Long (time). Five months, six months," said Guardiola when asked how long he expected to be without his defensive lynchpin. "Next year (for) sure. January or February." Laporte will be missed with centre-back one of the few positions where City are not blessed with great strength in depth. The Premier League champions did not buy a replacement for departed former captain Vincent Kompany in the summer transfer window.

Midfielder Fernandinho is expected to deputise at the heart of the defence with John Stones and Nicolas Otamendi the only two senior centre-backs available to Guardiola. City may be tempted to reinforce their defence when the transfer window re-opens in January.

However, speaking ahead of his City testimonial this week, Kompany said he trusted Guardiola to find the solution." By losing Laporte you lose a big player. You need big players in the bigger games but the key strength of this Manchester City team is relying more on the system than the individuals," said the Belgian.