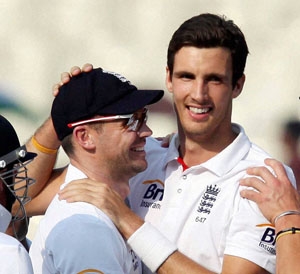 Kolkata : Describing as ‘frustrating’ India’s rearguard resistance led by Ravichandran Ashwin, which thwarted England’s bid for an innings victory, English pacer Steve Finn on Saturday credited the bowlers for ‘sticking to the plans’.

“It was frustrating to say the least. The last two wicket partnership was surely very frustrating. I think Ashwin batted really well. India’s rearguard action was great,” Finn told mediapersons after the fourth day of the third test match against India at the Eden Gardens.

Trailing England’s first innings score of 523 by 207 runs, India were reduced to 159 for eight in the second innings before Ashwin joined hands first with Ishant Sharma and then Pragyan Ojha to deny the visitors an innings victory and helping India to limp to 239 for nine – a slender lead of 32 runs.

“It was magic to get those six wickets in a single session. The bowlers stuck to the plans and we bowled well to put ourselves in a good position. Also our batsmen did well,” said Finn about the post lunch session in which India lost six wickets for a mere 59 runs. Finn who took three wickets in the second innings also warned against his team being complacent. He said that the 0-3 Test-series whitewash at the hands of Pakistan earlier this year was an eye-opener that prompted the team to work harder to adapt to the sub-continental conditions.

Stating that he was not surprised by the way England dominated in two games after India defeated them in the first Test at Ahmedabad, Finn said, “We felt as a team it’s been coming almost. Since we got beaten 0-3 in Dubai (by Pakistan), it was a massive eye-opener for us.

“Since then we have worked very hard on our games to be able to adapt to these conditions. And those are paying dividends in terms of results.”

Finn insisted that the visitors would guard against complacency even if they win tomorrow.

“If we win we will only be 2-1 up in the series, and going into the fourth Test it’s important that we have no complacency, and keep working, keep looking to get better. The great point about this England side is that we are always looking to get better,” he said.”Bowling straight was a big thing, being able to utilise the reverse swing, which I think we did well today.”