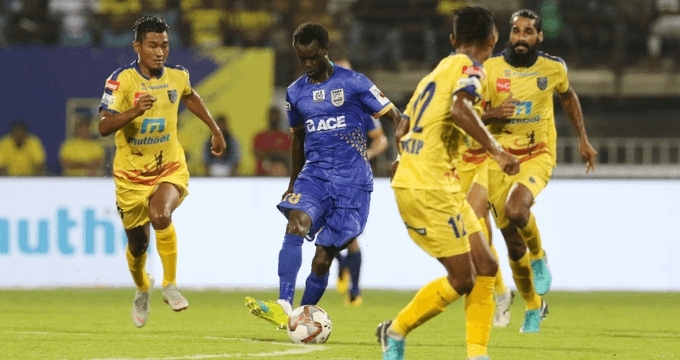 Kochi: After a promising start to their campaign, Kerala Blasters FC are set to pit their wits against Mumbai City FC in the Indian Super League here on Thursday.

Roared on by vociferous home support, Kerala gave a good account of themselves in their 2-1 win over ATK and coach Eelco Schattorie will be hoping to make the maximum of their home advantage.

Kerala generally tend to do well, if they perform well at home. In 2014 and 2016, when they reached the play-offs, they had a strong home record (KBFC lost just one home game in both seasons). "If you play at home, you have a little bit of advantage," said the Dutchman.

Mumbai have an air of surprise around them, given that they haven't played till now while Kerala Blasters have already given Jorge Costa an opportunity to analyse them. Schattorie felt that while it is an advantage for the visitors, he is not particularly worried.

"The playing style of Mumbai (City) is clear for me. How the positions are filled and which players is always a question mark when you don't see their games. If you already saw your opponent play one time, it makes a difference. (But) it is another challenge that we have to face," he said.

Mumbai manager Jorge Costa, however, said he saw what he expected from Kerala in their match. "We studied the team (Kerala Blasters) but it was the first game of the season. It was not a wonderful game, but it was very good. I watched KBFC for the first time but it was not a surprise. I knew the players, I know the coach," Costa said.

Mumbai will look towards the likes of Paulo Machado and Modou Sougou, key figures behind the team's run to the play-offs last season, to drive the team. They have several key Indian midfielders in Rowllin Borges and Raynier Fernandes who will be expected to set the tempo for the team from the middle of the park.

The Islanders will also bank on the firepower they have with new recruits Serge Kevyn and Amine Chermiti boosting their attacking arsenal. Kerala's defensive duo of Gianni Zuiverloon and Jairo Rodrigues will have their hands full on Thursday.

Kerala do have a bit of a fitness concern after influential midfielder Mario Arques was taken off injured in the last game. He will miss Thursday's match. But the onus will be on star striker Bartholomew Ogbeche, who scored a brace on Sunday, to deliver again.