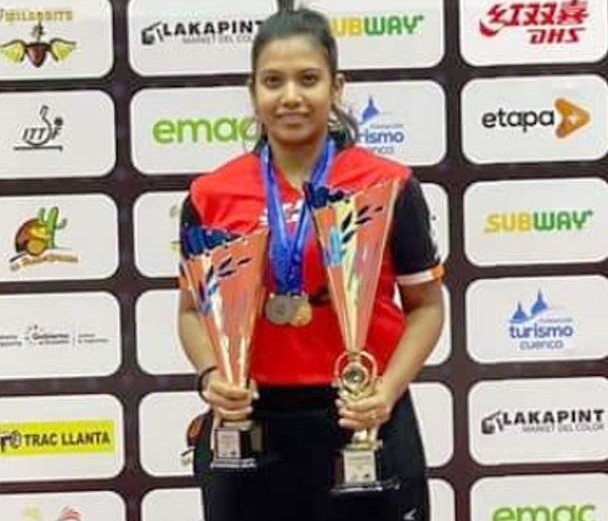 The 26-year-old Reeth, a Mumbai-based TSTTA player, was engaged in a close tussle for Supremacy with 28-year-old Ankita who started on a positive note by winning the opening game. But, Reeth showed plenty of determination and fought back strongly to win the second and third games to take a slender 2-1 lead. Ankita drew level by snatch a tense fourth game over extra points before Reeth once again found her attacking form and knocked the fight out of her teammate Ankita by winning the next two games and wrap-up the contest with a satisfying 6-11, 11-4, 11-6, 16-18, 11-1 and 11-6 games scores.

India completed a grand double when Manush Shah defeated Juan Jesus Gomez of Mexico 4-1 in the men’s singles final. The 20-year-old Gujarat paddler Manush was in control as he dictated the rallies against his 18-yearold Mexican rival and went on to close out the match with a creditable 11-7, 11-9, 11-13, 11-7 and 11-9 victory and claimed the country’s second gold medal.

However, Reeth and Manush were both denied from adding another gold medal to their kitty. The Indian pair of Reeth and Ankita suffered a 1-3 (4-11, 11-6, 7-11, 13-15) defeat at the hands of the Mexican duo of Clio Barcenas Arantxa Cossio in the women’s doubles final.

Later, in the men’s doubles summit clash, Manush along with Sanil Shetty were unable to combine effectively and went down fighting to the Mexican combination of Juan Jesus Gomez and Dario Acre in 5-game thriller. Juan and Dario held their nerves to carve out a deserving 3-2 (11-7, 4-11, 3-11, 11-9 and 11-8) victory.