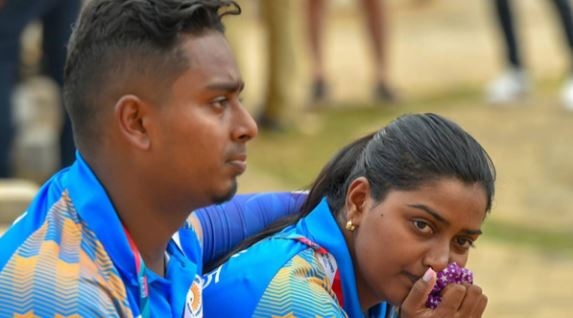 Tokyo: Indian archers would look to make amends of a forgettable start to their Tokyo Olympics campaign when the men's team takes the field for the elimination round here on Monday.

The men's trio of Pravin Jadhav, Atanu Das and Tarundeep Rai all finished outside top-30 in the ranking round to get a ninth seeding. The team would start off against Kazakhstan.

Making his Olympic debut, Army man Jadhav was the best among the Indians to be ranked 31st, four places ahead of Das, while veteran Rai, in his third Olympics appearance, took a lowly 37th spot among the 64 archers.

Jadhav would be taking the field two days after the quarterfinal defeat in the mixed pair competition, along with Deepika Kumari.

Maintaining consistency would be the key for Jadhav while Das and Rai would look to step up the momentum.

"He is a calm and composed shooter but lacks experience. Hopefully his mixed team exposure would put him in good stead," said the India chief coach Mim Bahadur Gurung.

If they get past the first round hurdle, the men's trio will face top seed Korea who have got a bye into the last-eight.

The individual elimination round for the Indians will begin on Thursday as ace archer Deepika Kumari would look for redemption.

Deepika and Jadhav had failed to live up to the hyped build-up to the Olympics, making a quarterfinal exit in the mixed pair competition on Saturday, an event considered their stronghold.

Many saw the loss against an ordinary-looking Korea as a tactical blunder after the Indian think-tank broke up husband-wife pair of Das and Deepika, who were coming off after winning a World Cup gold medal in Paris less than a month ago.

Olympic debutant Jadhav was preferred ahead of Das on the basis of his ranking round score. Jadhav and Deepika shot together for the first time ever, that too at the biggest stage of the Olympics.

Deepika herself sounded upset and was visibly down, failing to hit a single 10 to lose an easy match against Korea who fielded a young team with a combined age of 37.

Deepika will have a tricky first round opponent in Bhutan's flag bearer Karma who made the cut during 2019 Asian continental qualification to become the first-ever athlete from her country to get an Olympic quota in any sport.

Karma, who is ranked a lowly 193 in the world, secured 56th place in the ranking round.

If she overcomes the first round hurdle, Deepika is likely to face the biggest challenge of the individual round in the form of Korean An San who topped the ranking round, breaking a 25-year-old Olympic record.

The 20-year-old Korean had defeated Deepika at the same venue two years ago, in the final of the 'Tokyo 2020 Test Event'.