HomeSportsIndia v Pakistan, Women's Asia Cup: When and Where to watch; Live on TV and online

India would look to extend its domination over Pakistan when the two arch-rivals clash in their women's Asia Cup T20 match on Friday.

The Indian team gave ample game time to its fringe players, making as many as eight changes in the last two games, but against Pakistan -- one of title contenders -- the Harmanpreet Kaur-led side is expected to have full strength team on the field.

Pakistan are coming into the contest after suffering a shock four-wicket defeat at the hands of minnows Thailand on Thursday.

The two sides currently occupy the top two spot in the points table with India, who have won three games on the trot, leading the table.

While an India-Pakistan tie always generates hype, the recent two matches between the two sides failed to produce a close game with India winning comfortably.

India were at their ruthless best as they brushed aside Pakistan at the Commonwealth Games in July. In fact, India have won the last five meeting against the neighbours in the format easily.

After being rested for a game each, the star openers Shafali Verma and Smriti Mandhana will be expected to provide a strong start.

The big-hitting Shafali will be feeling the pressure as she still looks low on confidence. She was able to spend some time in the middle in the match against Malaysia but looked scratchy and far from her best.

The teenager will be eager to shake off the rust and play some dominant knocks with the T20 World Cup fast approaching.

On the other hand, Mandhana and skipper Kaur are coming off stellar performances in the white-ball series against England.

Jemimah Rodrigues, who returned to the side after a wrist injury, is in imperious touch. After notching up her career-best score in the opener, she brought her second consecutive half-century of the tournament and along with all-rounder with Deepti Sharma inspired a win against UAE.

The bowlers have continued to be clinical in all three games.

On the other hand, Pakistan batters, who were hardly tested in the wins over Malaysia and Bangladesh, had the perfect opportunity to get some runs under their belts. But, barring opener Sidra Ameen who scored a fifty, they failed to impress, failing to breach the 120-run mark against Thailand.

Their bowling attack, which has been clinical in the tournament, had few runs to defend. Their batters will have their task cut out against a confident and firing India bowling attack. 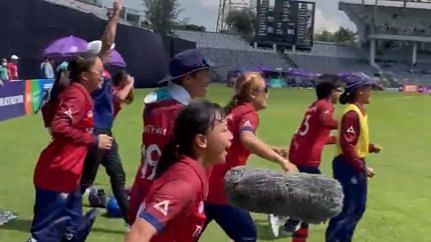 'Maradona is watching us from heaven': Lionel Messi after Argentina reach semis of FIFA World Cup...

FIFA World Cup 2022: Neymar distraught after Brazil's loss to Croatia, says it feels like a...

WATCH: Lionel Messi does 'Hand of God' during Argentina's win over Netherlands