India lost the series 1-3, with one more match to go

Mumbai: Australian bowlers held their nerves to deny India a series-equalling win in the fourth T20I at Mumbai on Saturday, as Women in Blue lost the match by a painful margin of just seven runs despite some quality knock from skipper Harmanpreet Kaur and a late flourish from Richa Ghosh.

India has lost the series 1-3, with one more match to go.

Chasing 189, India lost openers Smriti Mandhana (16) and Shafali Verma (20) in the powerplay itself, reducing India to 43/2.

Following that, Harmanpreet joined forces with Devika Vaidya to rebuild the innings. At the end of 10 overs, India was at 77/3, with Harmanpreet (20*) and Devika (7*) unbeaten.

The 72-run stand between the duo ended after King dismissed skipper Harmanpreet for 46 off 30 balls. India was dealt a heavy blow and were left at 121/4 in 14.3 overs.

Close finish in the fourth #INDvAUS T20I but it was Australia who won the match! #TeamIndia will look to bounce back in the fifth & final T20I of the series on Tuesday 👍 👍

In the 17.2 over of the match, Ashleigh Gardner landed another timely blow on India as she dismissed Devika for 32 off 26 balls. Half of Indian team was back in the hut for 149 runs.

India could not successfully pull of the chase, finishing the innings at 181/5, losing the game by seven runs. Richa was unbeaten at 40 off 19 balls, while Deepti was unbeaten at 12.

Richa however continued her onslaught, smashing fours and sixes to bring India back into contention. India was left to score 20 runs in the final over.

Ellyse Perry's blistering knock of 72 of 42 balls helped the Australia women's team set a massive target of 189 in 20 overs in the fourth T20I match against India at Brabourne Stadium here.

Put into bat, the Australian women's team got off to a brisk but Deepti Sharma gave India the first breakthrough dismissing Beth Mooney for 2 as the visitors lost their first wicket for 24.

Captain Alyssa Healy was batting strongly at 30, which came off 21 balls, but had to leave the field after being retired hurt.

Radha Yadav struck and gave India a second breakthrough dismissing Tahlia McGrath for 9 as Australia lost the second wicket for 46.

Ashleigh Gardner and Ellyse Perry struck a partnership to take Australia's total beyond the 50-run mark in seven overs.

The Gardner-Perry duo notched up a 50-run partnership in just 34 balls and also took the team's total beyond the triple-figure mark in the 13th over. Ellyse Perry went on to score her half-century of 32 balls.

India desperately needed a wicket and Deepti Sharma struck for the second time getting the prized scalp of Ashleigh Gardner who had made 42 of 27 balls. Australia lost their third wicket at 140.

The World Champions went past the 150-run mark in 17.2 overs with Perry and Grace Harris batting impressively. 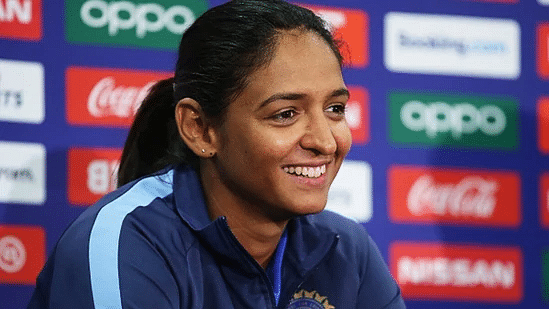