In Brits and Pieces 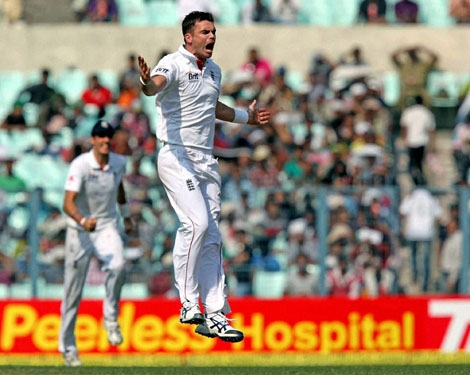 With nine wickets down, it’s matter of time spineless succumb to another humiliating defeat against England.

Kolkata : A spineless India were on the verge of a second successive humiliating defeat in their own backyard against England who were within sniffing distance of an emphatic victory in the third cricket Test on Saturday.

After conceding a mammoth 207-run lead, India’s famed batsmen put up a pathetic display but R Ashwin (83 batting) and the tailenders delayed the inevitable as the hosts reached 239 for nine at close on the penultimate day.

Ashwin, who flopped as a bowler, provided some resistance as the last two wickets added 80 runs after being at a precarious 159 for eight at one stage, forcing the game to stretch into the fifth day with India having a slender lead of 32.

With one full day left, England were on course for a huge win and take an unassailable 2-1 lead in the four-match series.

India got off to a good start with Virender Sehwag (49) and Gautam Gambhir (40) putting on 86 runs but the innings completely came apart after the lunch break with wickets falling with embarrassing ease on an Eden Gardens track, which gave some assistance to the bowlers.

While the Indian bowlers looked completely ineffective, the English bowlers exploited the conditions far better and raise hopes of their first series win on Indian soil in 28 years.

After the humiliating 10-wicket defeat in Mumbai, the hosts once again seemed clueless in their own den with neither batting nor bowling clicking against an English side which was the one expected to struggle on the sub-continental dustbowls.

Barring Ashwin, none of the Indian batsmen showed the stomach for a fight out as they perished to poor strokes. Cheteshwar Pujara (8), Sachin Tendulkar (5), Yuvraj Singh (11), Virat Kohli (20) and skipper Mahendra Singh Dhoni (0) were the big guns who failed to fire on a track in which England posted 523 in the first innings.

Earlier in the morning, resuming at the overnight score of 509 for six, England were all out for 523 within the first half an hour’s play.

Ashwin struck back to back boundaries to Swann to notch up his third half-century that also helped India avoid the humiliation of an innings loss as the Eden, which registered the highest attendance today.

Lackluster with his off-spin, Ashwin delighted the crowd with a straight drive of Anderson, following it up with a pull of Steven Finn as India ensured England had to bat again.

Ashwin’s shared a 38-run ninth wicket partnership with Ishant Sharma (10) to avoid an innings victory and later he stitched an undefeated 42 runs with Pragyan Ojha (3 batting).

Gambhir was again involved in a run out mix-up, for the second time in the match, with Cheteshwar Pujara (8) becoming the victim this time.

The English turnaround came in the post-lunch session as India lost six wickets for 36 runs as their fight to save the match went up in smoke. Earlier, the first session belonged to India who dominated the proceedings — both with the ball and bat — for the first time in the match. First, India scalped four wickets in 4.3 overs to restrict England’s first innings lead to 207 as they managed to add 14 runs to their overnight total.

Then, Indian openers Sehwag and Gambhir showed a lot of positivity when they came out to bat in the second innings as they raced to 86 for no loss at lunch but only to go down the drain after the break. India committed a harakiri of sorts after they resumed after lunch.

India’s promising start to their second innings, having conceded a 207-run lead, was undone when Sehwag got out in the first ball after lunch. Swann got one to rip back through Sehwag’s gate taking the top of the off stump to break the opening partnership for 86.

But without building on a partnership what followed was another dismissal as Gambhir once again helping England in another run-out. Poor Pujara (8) became the victim this time when the leading Indian run-getter of the series fall short of the crease going in for a non-exiting run as Bell hit the stumps directly from short leg.