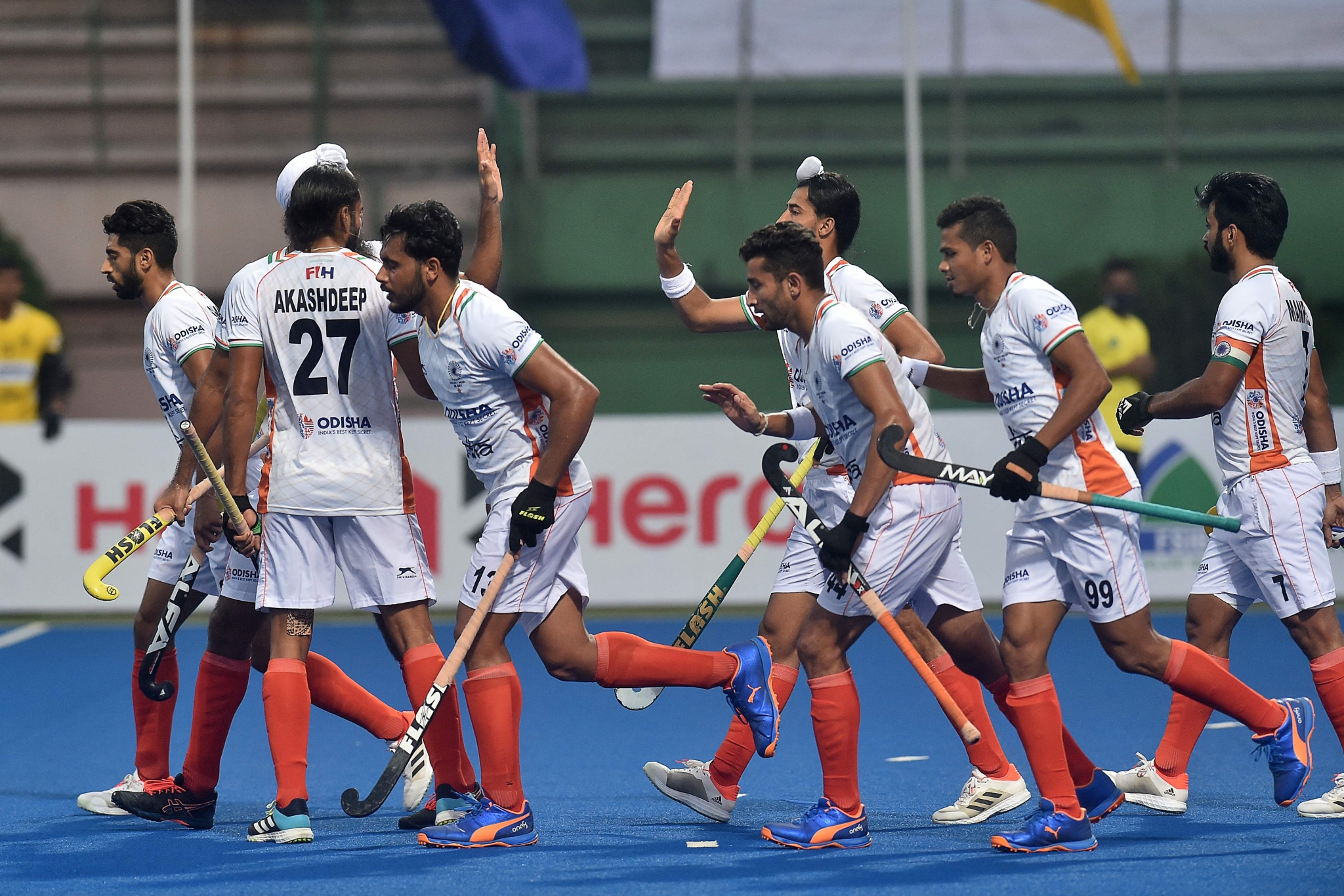 India celebrate a goal against Japan in the Asian Champions Trophy in Dhaka. | Photo: AFP

The Indian Men's Hockey Team is on a roll as they continued their unbeaten run at the 2021 Asian Champions Trophy, with a brilliant 6-0 win over Japan in the round-robin stage, here on Sunday.

India are in contention for their third consecutive title at the Asian Champions Trophy, having won the prestigious tournament in 2016 and joint winners in 2018.

Team India's dynamic frontline started troubling the Japanese defence as soon as the hooter blew, as they received a flurry of penalty corners early on in the first quarter. Defender Harmanpreet Singh made the most of the opportunity in the 10th minute, as he converted it into the 1st goal for India. India camped inside Japan's circle in the final few minutes of the first quarter. Young forward Shilanand Lakra and experienced striker Lalit Kumar Upadhyay managed to get shots on target but were denied by Japan goalkeeper Takashi Yoshikawa.

As soon as the second quarter started, Japan started working hard to find the equaliser. In the 21st minute, Japan received a penalty corner, but once again, the Indian defence was up to the task and denied Japan the equaliser. Dilpreet Singh continued his goal-scoring form, as he put the ball back into the net in the 23rd minute to score the second goal for India. Japan bagged another penalty corner in the dying minutes of the second quarter but were yet again unable to breach India's defence.

After half-time, Japan started showing attacking intent to cover up the deficit quickly and immediately attempted to make circle penetrations. But India continued to defend well, leaving no gaps for Japan forwards to get a shot away.

Jarmanpreet Singh scored from a reverse hit in the 34th minute to extend India's lead to 3-0. India goalkeeper Suraj Karkera made two important saves in the third quarter with Kenta Tanaka making threatening penetrations inside India's circle, and India maintained their clean sheet going into the final 15 minutes of play.

Early on in the fourth and final quarter, Sumit scored the fourth goal in the 46th minute after India surprised Japan's defence with quick penetrations and passes. Japan's defence faltered, awarding India a late penalty corner, and Harmanpreet Singh converted it into a goal with ease, adding in the 5th goal for India in the 53rd minute.

A minute later, Shilanand Lakra combined with Shamsher Singh as the latter scored the 6th goal for India in the 54th minute. Japan made penetrating runs in the final few minutes, but Team India maintained their calm and came away with another clean sheet, winning the match 6-0.