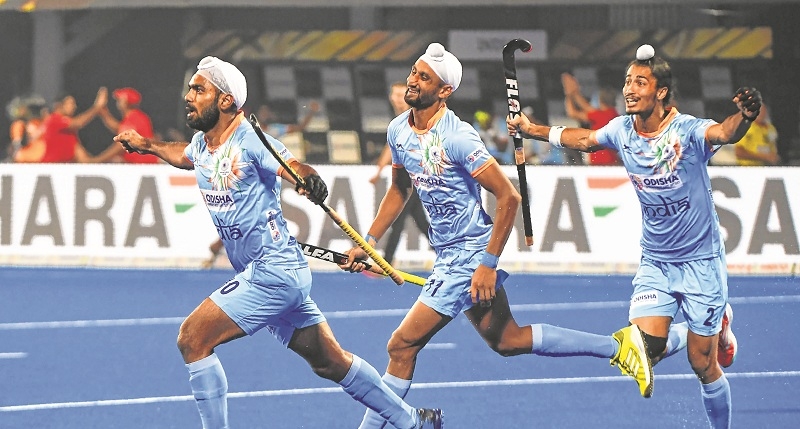 India's Simranjeet Singh (L) with teammates celebrate after scoring a goal against Belgium during the field hockey group stage match between India and Belgium at the 2018 Hockey World in Bhubaneswar on December 2, 2018. | Photo by Dibyangshu SARKAR / AFP

Indian hockey midfielder Simranjeet Singh, one of the star performers in the medal-winning campaign at the Tokyo Olympics, said on Friday that the team's morale got a "huge boost" before the bronze-medal match against Germany after the seniors gave stirring speeches.

The midfielder's two sensational goals in crucial moments made him an instant hit among the fans back home.

Though Simranjeet missed out on playing the semi-final, he was geared up for the bronze medal match, eager to make a mark. Recounting the mentality of the team as they headed into arguably the most important match of their careers, the midfielder said, "Before that match, we were aware that this was our last chance to win a medal for the country. The senior players sat us down and told us that this was our only shot to turn our struggles over the last two years into something worthwhile. Their motivational speeches gave us a huge boost. So, our morale before the match was high and we were quite confident."

Talking about his big break into the senior side, Simranjeet credited the seniors for guiding him and sharing useful tips, which he still follows to this day. He recalls the influence hockey stalwart Sardar Singh had on his early days in the team.

"Sardar Singh played in the same position as me. He was someone I always looked up to and I listened to his advice," says Simranjeet. "He always told me to make the most of every chance I got and to never let them go waste. He reinforced in me the desire to give 100 per cent at every camp and show the selectors my hunger to be in the team, every single day."

Simranjeet's Olympic journey is one for the books, going from the side-lines as a reserve player to taking centre stage with two goals against Germany in the bronze-medal match. He was not a part of the original squad of 16 announced earlier in June.

Expressing his initial disappointed at missing out, Simranjeet shared, "Like every player, I felt I deserved to be a part of the 16-member squad, especially because I knew the coach had faith in me. But I was confident that no matter which 16 were selected, they had the capability to get a medal and that was our focus. When I got to know that the reserves were also travelling to Tokyo, at first, I couldn't believe it. But when it sunk in, I knew that now, despite being a reserve, I would get at least one chance to play. I was determined to make the most of it."

Being on the bench for the first two games was no excuse for Simranjeet to stop working hard. He utilised his vantage point to analyse the opponents and prepare himself for his breakthrough opportunity.

"I analysed the New Zealand and Australian teams from the side-lines, constantly trying to figure out what I would do better in the situation and how I could make an impact in that position. These small observations really helped me later in the tournament."